Day of the Dead & All Hallow's Eve 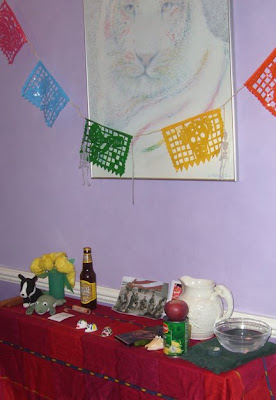 Ever since a Fall trip to Mexico with our daughter about six years ago, we've been setting up a Day of the Dead alter each year. We're not Mexican, but our daughter likes doing it and delights in the fact we do it and no one else does. Her school is pretty diverse, but only a handful are aware of the holiday – and one of those is her Spanish teacher. Above are the cupcake skulls. We also made traditional sugar skulls that we painted and gave to her classmates. They're made of meringue powder and sugar painted with tempera paints. No they're not intended for eating. Yes, three of her classmates ate theirs. Can't vouch for how tempera paint tastes. Probably better than paste.

Above is the alter. Left is a close up. Each item on the alter has a meaning. Most importantly, there needs to be a photo of a deceased loved one you're honoring. In our case, having had no one close to us pass this year, we have out a photo of some servicemen that have died in the past year. 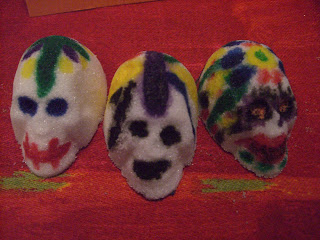 Cut-out banners–purple (for pain), white (for hope), and pink (for celebration). There's also shells to represent water; candles for fire; corn or chili for earth, and a musical instrument for wind. There are three sugar skulls representing the trinity; a small cross; bread; fruit; candy; and a towel, soap and bowl so the "ghost" can wash their hands after the long trip back here to earth. There's also a pitcher of water and their favorite alcohol to quench their thirst (we chose a beer as being a favorite of the military). Marigolds are a must, as they attract the ghost to this banquet. A feather represents the dawning of a new day, a black dog represents a guide accompanying the soul to the afterlife and a frog represents twilight of another day.

This is a very intense and expensive holiday for self-sufficient, rural-based indigenous Mexicans. They might spend as much as two-month's salary on their alter. in return, they believe that the happy spirits will provide protection, good luck and wisdom to their families. 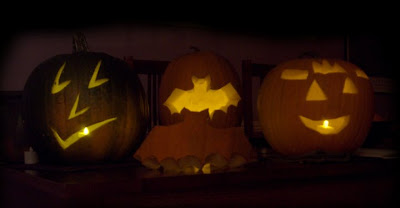 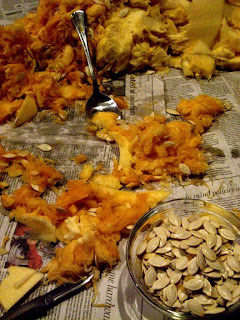 We also do the expected carving of the pumpkins, which we just finished. A friend out in the sticks grows a field of pumpkins for her kids' school and usually has between 200-250 she donates for their school pumpkin sale. We get there before the school pumpkins are picked and get a good selection to chose from. This year we picked three and one was a vary handsome dark green pumpkin. Do you do anything out-of-the-ordinary for Halloween?
Labels: Holiday