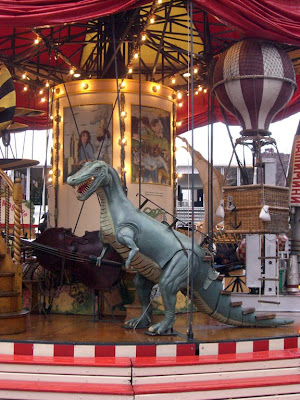 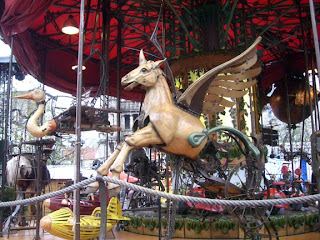 There's nothing like the Kerstmarkt in Brussels, Belgium, to put you in a holiday mood. Every year from the end of November to the end of December in Place Sainte Catherine, a Christmas festival/market is set up. The most fantastical thing (after the food) to me is the carousel (called the Magic Roundabout). There's also a smaller carousel named the D'Andrea Roundabout. Two years ago, we spent the time between Christmas and New Years in Brussels, staying in a hotel smack dab in the middle of the Christmas Market. 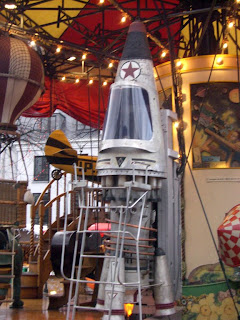 We took our daughter, and as much as we enjoyed the festival, she was more excited to swim in the hotel pool - swimming is not something she gets to do much of in Buffalo in December. Of course, with her body clock out of whack, the excitement of a carnival for the day, followed by swimming, she would fall asleep in the middle of dinner each night. Then she'd be up a the crack of dawn the next day, beginning the cycle again. 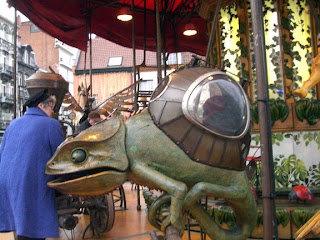 There are stalls throughout the market selling everything from hand-carved trinkets to reindeer pelts. We spent our money on edible delights - sausages, mushrooms and glühwein (red wine, heated and spiced with cinnamon sticks, vanilla, cloves, citrus & sugar - basically a mulled wine). Glühwein wine only tastes good when you're walking around outdoors looking at Christmas-y things. If you're drinking it in your kitchen, in nice weather, it's horrible, horrible stuff. 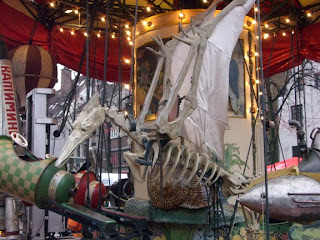 Anyway, the carousels are jewels. They are the type of carousel Jules Verne would have designed, had he been a carousel designer. Actually, they were designed by a theater company. There are hot air balloons, rockets, biplanes, cruise liners, dragons, dinosaurs, submarines, snails, pterodactyls, sailboats, winged horses, lizards, sea horses, ostriches, musical instruments and more. 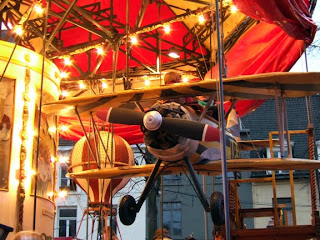 Some move up and down, some go sideways - the rocket goes through a hole in the top of the carousel (there's always a long line for that one). They only allowed rides to kids, unfortunately. 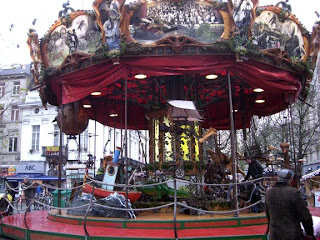 There are activities for adults though. There's a large ice skating rink, and there is a Ferris Wheel. I'm told this year that the Ferris Wheel has glass-enclosed seats. When we rode it two years ago, we were better able to appreciate the wind-chill factor in the exposed seats. There are also brass bands, ice sculptures, DJs and art exhibits. 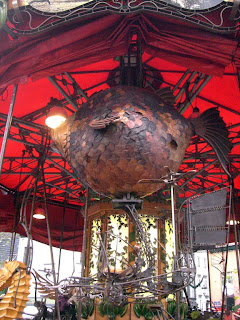 Just over a block or two is the Grand Platz, with its immense Christmas tree, choirs, life-size creche and light show illuminating the gorgeous, ornate buildings forming the square.

If you ever have the chance to get to Brussels anytime in December - do it! This has nothing to do with gardening. But it's Christmastime and I thought I'd share.