My third book - The Buffalo Philharmonic at 75 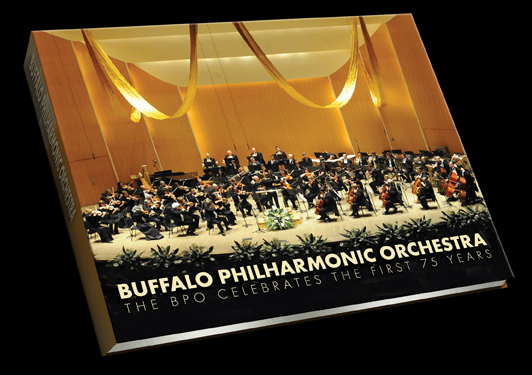 The third book I've designed is new to store shelves this week. I designed this book for the Buffalo Philharmonic Orchestra (BPO) and the publisher, Buffalo Heritage. Written by Raya Lee and Ed Yadzinski, it starts with the Orchestra's "prelude" of symphonic music in Buffalo before the Orchestra was formed (early 1800s), through to its Grammy Award-winning present incarnation.

There is TONS of great information in the book. It's not a complete history -- it's not an academic piece -- so we're calling it the "story" of the BPO. The Orchestra started in 1935 with the Federal Emergency Relief Bureau and the Works Progress Administration, two federal programs established to employ artists and musicians during the Depression. You know, economic stimulus money, maybe you've heard of that recently.

I learned a lot doing this book. Most notably, that an orchestra is defined by its conductor/maestro/music director. And so the chapters of the book are divide by our music directors -- 10 in 75 years. The current Music Director, JoAnn Falletta, is the first woman to serve as a music director of a major symphony orchestra.

There are great tidbits of information in the book -- did you know the Buffalo Philharmonic toured under the name of The Boston Pops in 1964? That both Doc Severinsen and Marvin Hamlisch have been our Pops Conductors? The BPO was one of the first orchestras to feature Van Cliburn -- and that he's been coming back for more than 50 years since that debut in 1954? They've won two Grammys? They've appeared at Carnegie Hall more than 20 times? They were included in the soundtrack of Woody Allen's Manhattan? That Frank Zappa once hired them to perform his orchestral works? That they are assembling the orchestral works of Marcel Tyberg, a composer that died at Auschwitz in 1944, without ever having had any of his works published or performed until last year? That Symphony Circle was a temporary name given to, what was previously called "The Circle," for a fund drive in 1958?

For any Western New Yorker that is a fan of the BPO, this is a must. If it's not you -- then surely you must know someone that would love this as a gift this season. There is also a five-CD set of BPO recordings, and a 2011 BPO calendar available -- where ever well-designed books are sold throughout WNY (Barnes & Noble, Borders, etc.), or online here: Buffalo Heritage.
Labels: Buffalo