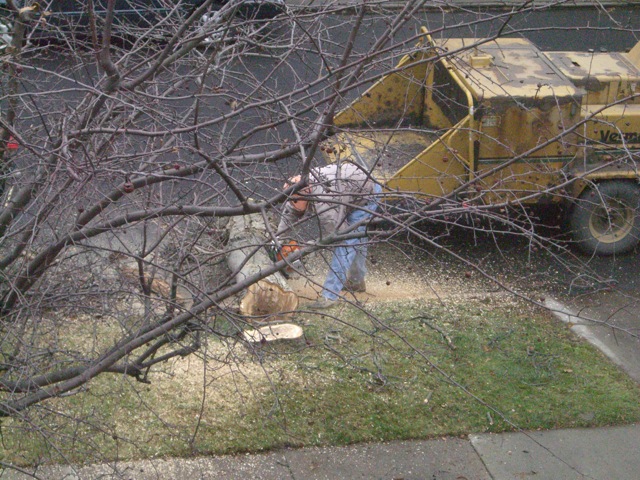 Four years. We'd just elected a new president by December 3, 2008 when the photo above was taken. And city workers had stopped by that day to cut down a rotting-from-the-inside horsechestnut tree in the hellstrip (area between road & sidewalk). Then, four years later, they came and took out the stump. That's right. It took four years to take out a tree stump. Next week we'll have a new (or old) president, and I finally have a tree again.

I either called in, or emailed in, five complaints to the mayor's complaint line to request the stump be taken out, citing it as a tripping hazard. I even got pretty snotty in year three. The responses I'd gotten each time was that the situation was resolved -- as far as the mayor's office was concerned -- because they'd done their duty of passing it on to the Forestry Office.

In year four, about five months ago, I called the mayor's office directly. They said it was resolved because it was in the hands of the Forestry Office. Again.

This time, I called the Forestry Department. They said that a tree was planned to be planted by the end of November. I wanted to yell and scream and say,  "I am president of Garden Walk Buffalo for six years and I've done more for gardening in this city than any other resident and I wanted this friggin' stump out NOW!" But I didn't. I'm sure that would have made a difference. Not. I maintained my dignity. But I got snarky. I just said I'd believe it when I see it.

I've been putting off planting my hellstrip for four years, not wanting to commit to spending money or time on something that was gong to be torn up, or may get a tree, or may not get a tree. So now I can start plotting what I want to grow under my new tree.

And, do you think they'd let me know what kind of tree was planted? No. that would be too accommodating. I'll have to have one of my horticultural friends come identify it for me. It has no leaves currently because it's, well, fall.

I was given a sheet of instructions including generous watering in the spring, no string trimmers around the tree base, no piling on of mulch, and take the stakes off after a year. It was planted this past Monday, October 29 - the day Hurricane Sandy hit NY/NJ. I think I'll name the tree Sandy.