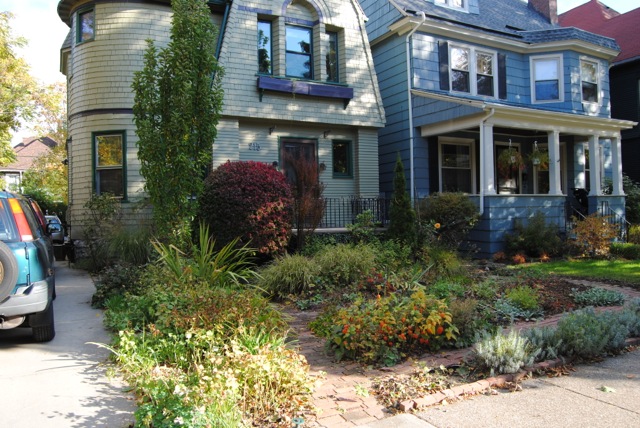 Now that the tree is gone, I have to rethink what I want to do in our front yard garden. It's not a blank slate, but with the tree and thorny barberry hedge gone, there's a few big blank spots available to rework and rethink. 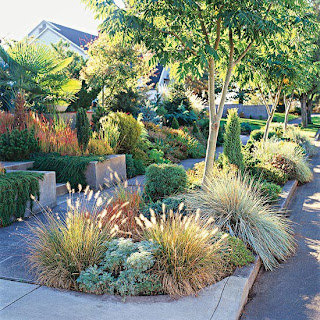 Below are images I'd saved, a while ago, of small-space gardens I liked. I'm looking for low-maintenance (always) with no (or little) pruning, deadheading, or watering. I do want color, different textures, and different shapes of plants. I like what I see in these photos -- conical, narrow and rounded conifers, textured shrubs, colorful Japanese maples, bursting grasses and few perennials. I also have the hellstrip (area between sidewalk and street) to think about. So that will have to go into whatever I do. New beginnings for a new year! 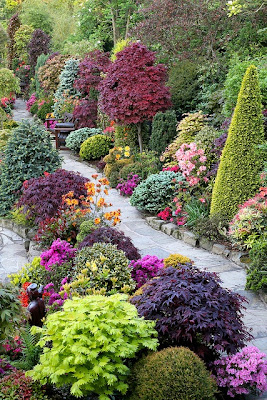 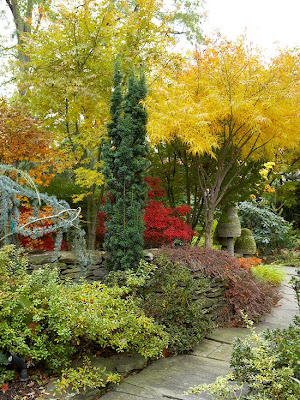 I went to Urban Roots Community Garden Center a few weeks ago, and bought a bunch of shrubs, a grass and a couple ground-hugging perennials to plant before winter hit. They were 50% off the price for members, so I figured it was better to buy them cheap, and now, even though they no longer looked "pristine" sitting on store shelves. I'm cheap that way.

I will probably have to move them all again once I have a better plan in place, but at least this spring they'll fill out the voids left by tree and hedge. When I was planting the catmint, the neighborhood cat showed up out of nowhere to acknowledge his approval. 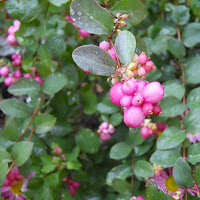 Amethyst Coral Berry (Coral Berry) is an excellent choice for brightening up the autumn landscape! Vivid, deep purple-pink fall fruit makes this plant a must have in the landscape. The effect is stunning to say the least! Amethyst has good branching and a neat habit, unlike the rangy forms seen in many older types of Coral Berry. Amethyst is an easy growing plant that is well adapted to even the most difficult growing conditions. It works nicely in informal woodland type gardens, and has been reported to be somewhat deer resistant. Use in mass plantings or hedges for the best color effect. Beautiful when used as a cut flower, it will bring life to any bouquet or floral display. This is a great plant to include in the home garden landscape! 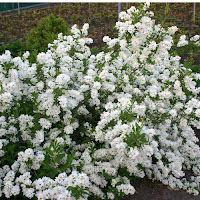 Snow Day Surprise Pearl-bush Exochorda
Snow Day Surprise's large white blooms cover this plant in a flood of spring flowers. This is a stronger grower than old fashioned Pearl-bush, with a neater, more compact habit. An excellent plant for the spring landscape! 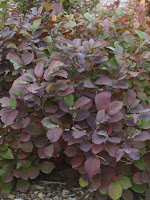 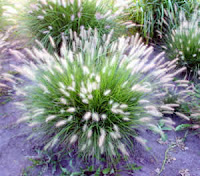 Dwarf Fountain Grass "Hameln"
Pennisetum alopecuroides
'Hameln' is the oldest cultivar of Pennisetum alopecuroides. Use it wherever the straight species would be too tall. Blooms earlier than the species, making it a better choice for gardens with a short growing season.
'Hameln' is a dwarf form of Fountain grass. We have strived to keep our strain pure as there are now varying heights sold under the name 'Hameln'. 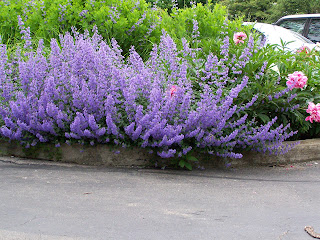 Nepeta "Walker's Low"
The Catmint plant is undoubtedly best known for its effect on all members of the Cat family. All felines, from the wild mountain lion to the domestic tabby, are attracted to this species with results that are often strange and hilarious. The stems and leaves of Catnip are lemony-mint scented, and generally invoke little interest on the part of humans and most other animals. Bees seem to prefer its flowers over most others, but a common plant pest in gardens, the flea beetle, is deterred by it. Rats are known to be repelled by it. Cats, however, rub against Catnip as though trying to coat themselves, roll on it, toss it about, and rub their faces in it. If fresh, many cats will often consume the leaves. Catnip is commonly used as a stuffing for cat playthings, and is claimed by some to be a feline aphrodisiac. The universal appeal of this species to cats is underscored by the fact that the herb’s common name in every Western language contains some variation of the word “cat”. 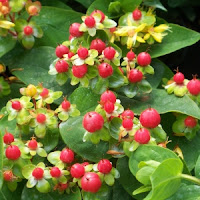 Hypericum x "Red Lion" Low growing with a rounded, mounding habit, attractive small, dark green to olive-green leaves and lots of yellow flowers in early summer that are followed by the primary decorative feature in the form of abundant chocolate colored berries about twice the size of a garden pea. The berries persist through summer and fall and even into winter, and, when cut, bring an exciting new look to indoor arrangements. 12-14” high. Here in zone 5 plants behave as die-back shrubs, dying back in winter and reemerging from the crown once the temperature has warmed up in spring. Use in full sun, in average, well-drained soil. Zone 5.
Labels: front garden My garden