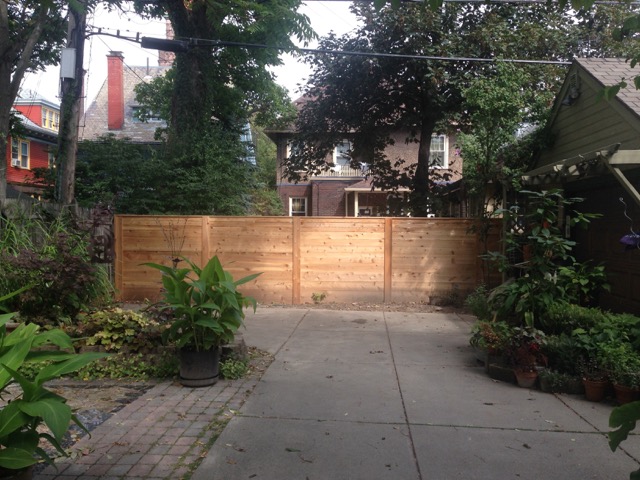 I finally had a horizontally-oriented fence built. I've been wanting one for quite a while. When you live in such an urban setting, on only a 60'x80' lot size (with a notch taken out of even that), and nine neighbors surrounding us, with six of those actually sharing the fence, fences are important.

The existing fence was a standard 6' picket, not painted or stained, so it's gray and slowly rotting in place. The fence we had installed is only the 30' section at the end of our driveway. Formerly we had bamboo planted there that was invading our neighbors behind us. They are very nice and asked us what we could do to get rid of the bamboo – knowing that it will never be gone completely. Never, NEVER, let bamboo touch the ground unless you own the surrounding acres. Plant in well-constructed unbreakable, invincible pots or troughs. Or line the area for many inches deep with corten steel (the roots don't go too deep).

The fence was falling apart, and the area between our two garages was so engulfed with Japanese knotweed (Fallopia japonica), an old chain link fence, and a large stump, that we decided together to have someone come in and clean out between the two garages and build a new fence. Most fence companies don't do the clean-up portion of the job, nor the bamboo-be-gone digging that would be required. But we did find a contractor that could fit this in between jobs.

They spent a day taking out the old fence, digging new post holes, digging out the bamboo roots, and cleaning up between the garages, which was a big job. Day two they built the fence.

I told them exactly what I was looking for. It is cedar, with horizontal planks. The planks at the bottom are the widest, getting narrower as they go up, with slightly more space between them as they go up too.

It had to be strong, too. Our driveway is narrow and long - it goes the full 80' of the lot. And it's where the snowplow pushes the snow. Last winter, the snow piled there by the plow and added to by us shoveling had the snow pile there at the height of the fence!

Anyone that was on the Garden Blogger's Fling in Toronto that met me probably knows I was carefully looking out for, and studying any horizontal fence we came across. It seems to be a trending fence style, as most newer fences we saw had a horizontal orientation.

The contractor put in a a narrow locking gate so that our neighbors behind us can have access to the area behind their garage. We did put down a decent coating of weed killer, as well as covered the area with landscape fabric. But don't you know that the Japanese knotweed is growing underneath the landscape fabric and pushing it up? We'll stomp it down as best we can and try to stay on top of it as it tries to grow back.

Now I have to think about what to do with the fence and space design-wise. Left to its own devices, the cedar will turn silver gray over time. Not sure I want to have that happen. I like my color. I am considering a subtle stain of blue-green. Though I have not yet passed that by my executive committee.

In the narrow strip of ground in front of the fence, which is basically a verrrry long triangle, I am thinking of planting grasses - divisions of grasses and maybe a few new or "gifted" grasses. I have plenty of grass choices from ones I already have including many Japanese forest grass clumps that need dividing. Those, and some taller grasses may be all I need in the spot - NO MORE BAMBOO. Even though the Black Cane Bamboo (Phyllostachys Nigra) was lovely, was a clumping-form  (as opposed to the running form),  made a beautiful backdrop – and has provided me with plant stakes for the rest of my natural life – it pained my to see it grow under the fence in into neighboring yards.

And then I have to start saving money to do the 80' section of the nearly 80' section of fence along the other side of the property that borders FOUR other houses.