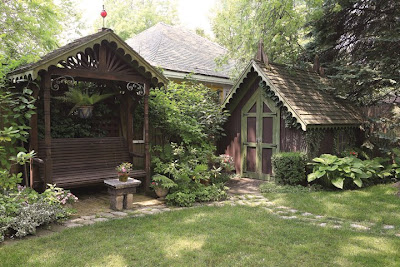 The Garden Bloggers’ Design Workshop for this month is on Sheds and Outbuildings. I've been collecting images of the variety of sheds and outbuildings from the local garden tours I went on this summer. Obviously, many come from the tour that I am the president of, Garden Walk Buffalo.

Above is my favorite shed/bench combo ever. It belongs to past Garden Walk Chair, Arlan. He designed and built it himself (well, I'm sure Dom helped). It contributes mightily to the park-like setting he's established in his small yard of great ideas. Visit here to see his strawberry steps. 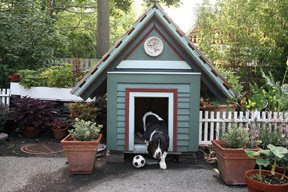 Like the post title says, this is a spread of sheds–the photo above of Cornelius' doghouse probably pushes the definition of outbuilding, but it's tough to argue with Cornelius. His house is special in that it matches his owner's house, not only in style, but in colors. See more about Cornelius in my post about his garden, Never work with kids or animals. 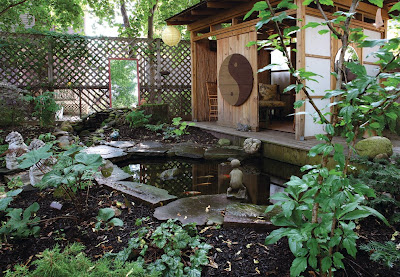 Then, there's Lou's Japanese Tea House. It's probably the most unique "out building" on Buffalo's Garden Walk, again stretching the spread of what a garden outbuilding entails. This photo's a couple years old and after many limbs came off some ancient trees in a storm a few years ago, it was replanted to accommodate the new sunshine in the yard. It's actually way more lush now. The walk down Lou's driveway is like teleporting yourself to Japan– just like Hiro Takamori does every Monday evening! 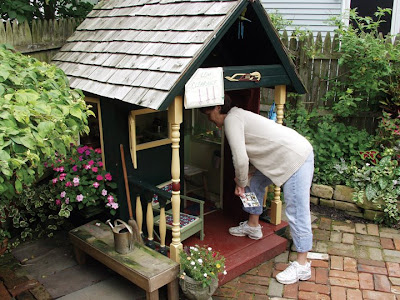 Above is Sydney's play house. A very popular stop on Garden Walk Buffalo. This minimal yard makes maximum use of its size. Sydney's parents design & built the house. It is as sweet and beautiful as Sydney is. Although she's growing too tall to play in it. 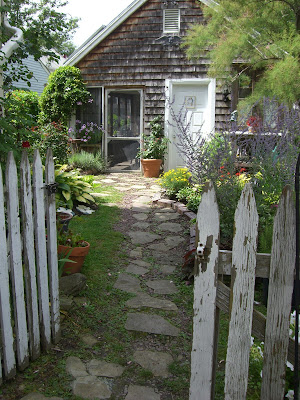 I found this shed on the Black Rock & Riverside Garden Tour this summer. It looked so much like a beach shack. It reminded me of the tool sheds & shacks from the place we used to stay at in Amagansett, in the Hamptons, years ago. It's a charmer. 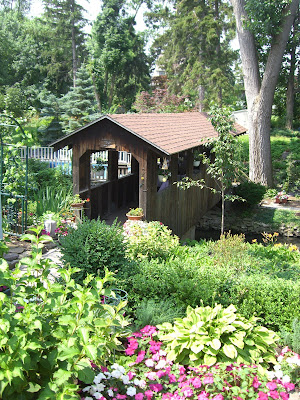 Again, pushing the limits of a backyard outbuilding, I've had this photo I took on the Williamsville, NY garden tour for a while. A very unassuming front yard led to a backyard with a deep valley and creek - complete with a covered bridge! The bridge actually led over to an above ground pool that was surrounded by gardens. This was awesome–you could tell from the awe on some people's faces as they rounded the corner of the house. This was no little covered bridge. They throw parties on it. 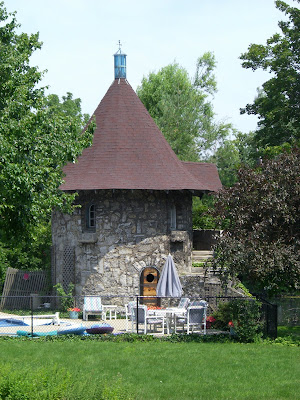 Once you crossed the covered bridge from above, and climbed a short hill, and peered over some hedging & fence - this fairy-tale like outbuilding took over your attention. It's obviously used now as a pool house, but originally may have been a structure relating to the creek hidden on the other side - a gatehouse or something. 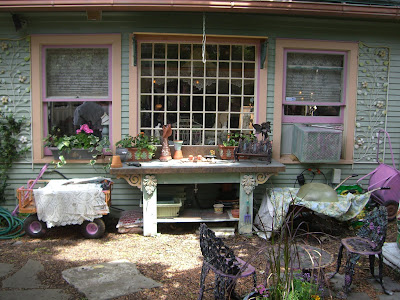 On the Parkside Garden tour, another tour in the downtown area of Buffalo (we have lots of garden tours) was this potting table against a shed wall. The garden is an over-the-top celebration of all that is Victorian. This garden has to be seen to be believed. It's a must see garden on this garden tour. 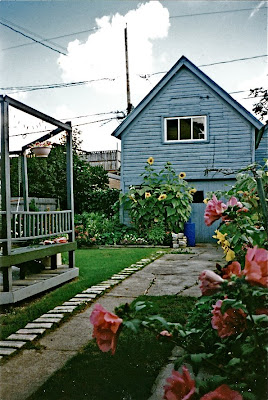 This photo about 15 years old. This was the carriage house at the first house I owned. A car could not fit in it, so it was certainly NOT a garage. I show it not because It's spectacular, but you can see how much potential it had. I had such big plans for it - new windows, studio space, second-floor barn-style doors wide open, skylights, cupola and more. Never got around to it. The current owners, who are also on Garden Walk Buffalo (I made them be on the Walk when they bought the house - condition of the sale!), have done a great job with it - it's purple now, and handsome as all get out! I get to visit it each year for Garden Walk and see what else new they've done to it. 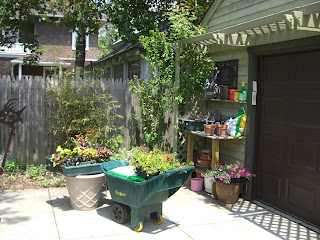 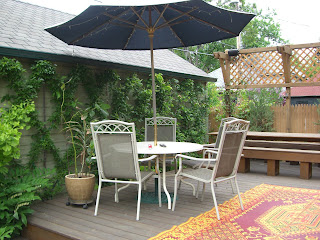 And here's my challenge - the front and side of my own garage/outbuilding. I've got a collapse-able potting table on the front (if it didn't collapse, I'd never fit my car in it in the wintertime. There's a trellis over the garage door that roses are climbing (slowly) on. The other side of the garage has the plum/apple/pear tree diamond-shaped espalier. Plans? A mural on the garage door perhaps? Solar panels on the roof? A cupola? When other more immediate projects get done, this is on the list.
Labels: Buffalo Garden Tour Garden Walk My garden neighborhood