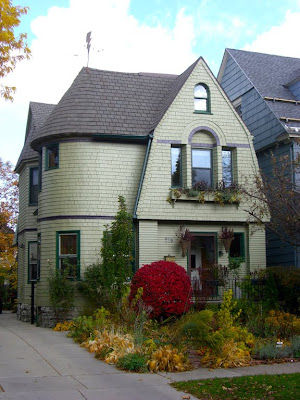 Hard to miss the big red ball in the front garden this time of year. The Burning Bush (Euonymus alatus) gets a good trimming a few times in the summer into its ball shape. I've not trimmed it in months. After being away for a week, came back to find it had morphed into a great big red clown nose dropped in front of the house. 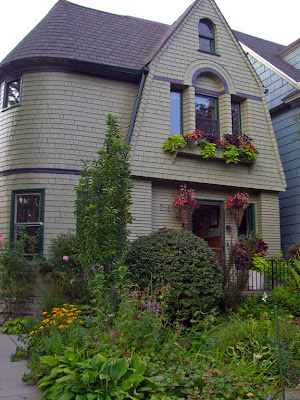 Here it is, back in September. As a green ball, it blends in with everything else and you can barely tell it's there.
There's a more detailed post on Burning Bush and its invasive tendencies to be found at May Dreams Gardens. I don't have to worry so much about it being invasive in this setting.

It is one of the few plants that was here when we moved into the house. It covers up a good chunk of the ugly concrete porch & stairs. Eventually, I'd like to design a front porch that would complement the 1897 gambrel-roofed Dutch Colonial Revival house. I don't think the concrete, cinder block and black wrought iron fence are too historically accurate. Or good looking.