Neuschwanstein Castle (no gardens to speak of) 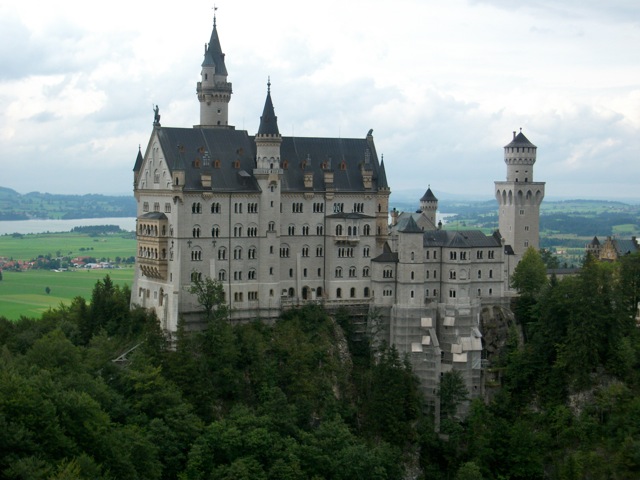 Sorry, no garden here, really. Hard to put a garden on an alp. Neuschwanstein Castle sits on a hill in the Alps in Bavaria, along the German border with Austria. Supposedly, this is the castle on which Walt Disney based Sleeping Beauty's castle in Disney Land. It is truly impressive and looks spectacular year round. It's a 19th century building (finished in 1884, just 13 years before MY house was built), by King Ludwig on the foundations of a castle formerly on the site. This was our second trip here. We wanted to come back here and bring our daughter. Every girl should visit a real castle while they're still a kid (I'm told).

The only garden-ish part of this castle was the grotto room on one of the upper floors of the building. Sorry, couldn't take any photos on the inside of the building. Let's just say the castle was first conceived by a set designer and the grotto room, complete with faux-stone walls, pebble floor, clever lighting, hidden doors and fountains, was very well done. Not that the bedrooms, ballroom or throne rooms weren't well thought out. Most were themed with the music & theater productions featuring Wagner, King Ludwig's favorite composer.