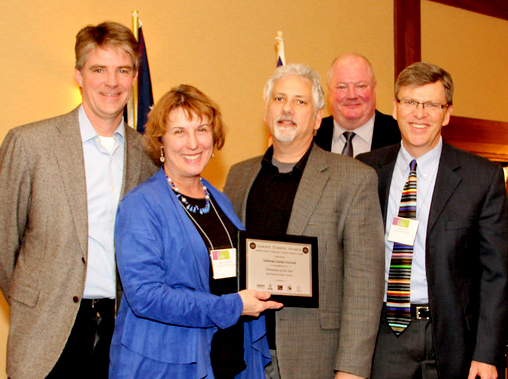 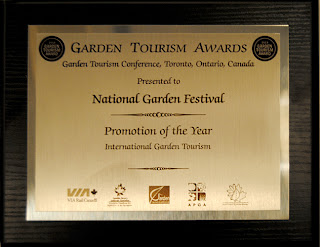 Sally Cunningham, director of the National Garden Festival (beautiful in blue); Ed Healy, VP of Marketing for Visit Buffalo Niagara (in the nice tie, above); and myself (with all the gray, above) accepted the award on behalf of the Festival's organizers and volunteers.

Cited as the reason the National Garden Festival was singled out for this award, Michel Gauthier, chair of the Garden Tourism Conference, declared, "The six-week long garden promotion is an outstanding demonstration of what can happen when you bring together all the garden energy of a community with the tourism energy of the same community. This unique promotion has put Buffalo on the map like no other promotion. The National Garden Festival intends to build upon the very real excitement, publicity, and visibility created by Garden Walk Buffalo, "America's best event of its kind." This multi week festival expands the opportunities for garden tourists to visit Buffalo beyond Garden Walk weekend and builds on America's growing obsession with all things green. Congratulations!" 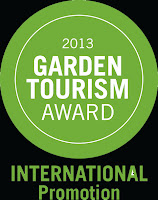 The Garden Tourism Awards are presented to organizations and individuals who have distinguished themselves in the development and promotion of the garden experience as a tourism attraction. Recipients traveled from across North America and as far away as Japan, France, Portugal, Italy, and Australia to proudly accept their Awards.

“It is an honor to be part of the international community that has established an awards program to recognize the invaluable contribution the world’s outstanding garden experiences make, not only in terms of environmentally friendly and sustainable tourism, but also in terms of the equally important intangible benefits that nature brings to the soul,” said Alexander Reford, Chair of the Canadian Garden Tourism Council as he handed out the Awards (left, in photo at top).

The Garden Tourism Awards are sponsored by: VIA Rail Canada, Baxter Travel Media, Canadian Tourism Commission, CNLA, Air Canada and the Horticulture Centre of the Pacific.