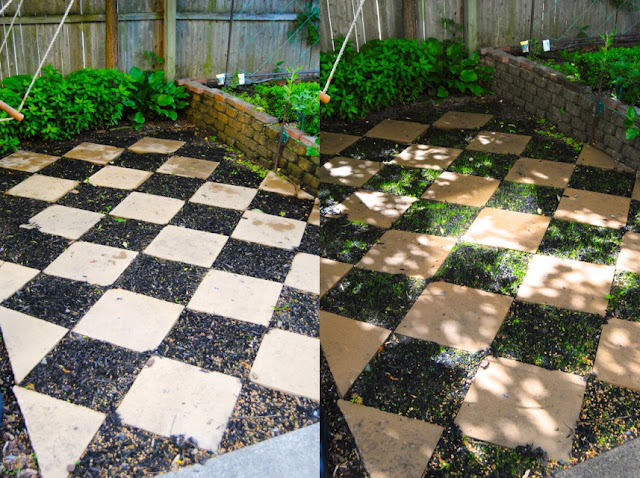 Above is my checkerboard garden. It's under a "horsey" swing – part of the jungle gym/swingset my daughter has well outgrown. When I first put it in, it was done with too-thin slate tiles that broke apart after a few years. The square pavers you see here are concrete – and thick.

I had also originally spent LOTS of money on a line of plants called Stepables - I had different Stepables in each few squares - two thymes, silver kisses, baby tears, Irish moss and different sedums. For the full list with Latin names, see here. It took about three seasons for it to fill up.

But at the same time, the tree across from it and above it grew and put this area in deep shade. Then it was a race to see which Stepable would disappear first.

Before they were all gone, I planted them in other sunnier areas of the garden and are thriving fine. Most got planted into the hypertufa pots I made last year.


So now I was left with what to plant in deep shade that gets nice and thick - and doesn't cost much. I was told vinca, mondo grass and other suggestions - but I decided on plain old everyday grass.

Yes, I've planted grass in my yard (of which my end goal is to eliminate all grass). But grass is a reliable grower, consistent in texture and color. I think it'll look great here. Plus the fact that it's under a play area grass can take much abuse. More than all those fancy Stepables.

I'll have to mow it (probably just use a weed whacker) and still have to weed it. But I can weed it by hand as opposed to using chemical weed killers – it's not that large a space.

Actually, grass has its place in a few spots in my garden. I'd be lying if I said I had a completely  grassless yard.

At the top of this post, you can see the squares with the new grass just peeking through. It's a grass mix made for deep shade. I still have a few concrete blocks I need to cut in half. With my circular saw and a blade made for cutting concrete, I get one cut per blade (it's getting expensive again). The goal is to have it done before the National Garden Festival's Open Gardens start next Thursday. At least it'll look like a project in process, as opposed to a garden of bad decisions and bad luck.