Not as hellish of a strip this year

Last year's project, the start of reclaiming the hellstrip (the area between sidewalk and street) has has been, so far, a success. Starting with nothing but a green slice of a mix of clover, creeping Charlie, purslane, dandelions, mushrooms, and even a smattering of grass, it was a harsh bit of real estate for grass to grow well. 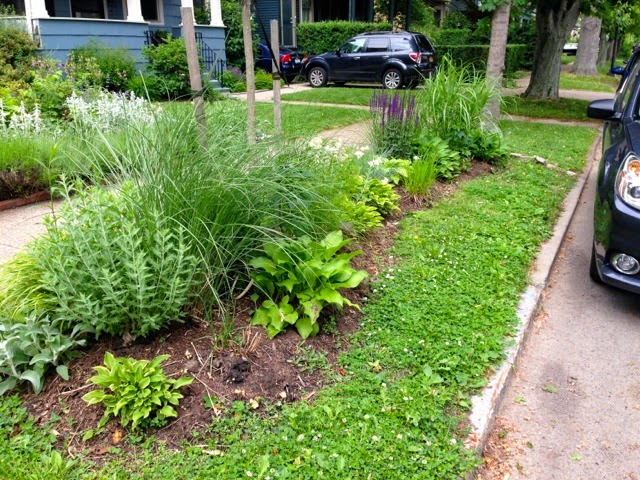 Mostly by dividing grasses and hostas from other areas of the garden, with a few purchased acquisitions, I filled in the majority of the strip.

Next up, I want to add a small area of brick, or concrete pavers where the garbage cans spend a day waiting to be picked up each week. at the end of the driveway.

I also want to line the street side with pavers as well, so people getting out of their cards don't have to step into a garden. Lastly, I want to add a row of lavendar along the sidewalk to mirror the lavender across from it on the other side of the sidewalk. Rather than buying lavender, I'm thinking about rooting my own from the plants that are there already. That way I know it'll be the same exact cultivar. There's a lot of different lavenders out there.
Labels: front garden My garden