A potting table for the potting shed 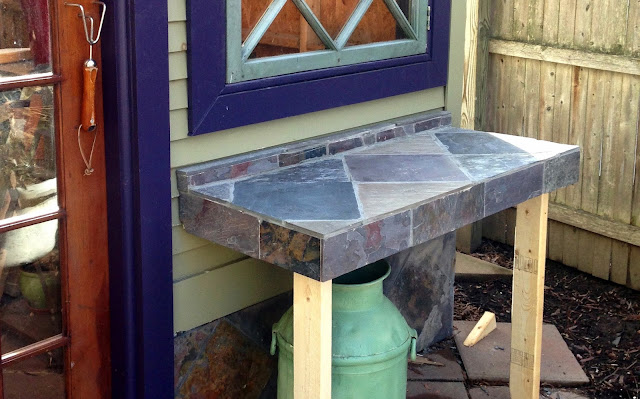 Wow. I didn't post once in February. That's new.

It's been a crazy month. Thank god it was the shortest month of the year. We did a Caribbean cruise and a few days at Disney World at the end of January, then two weeks later did a six-day trip to Birmingham, England (Stonehenge, Warwick Castle, The Roman baths at Bath, and a monkey forest!).
And two days later my mom died. There was that.

She's spent the last six-plus months in a group home for Alzheimer's patients. Quite honestly, her quality of life was not great.

Back a month or more ago, when she was still aware of what was going on around her,  she was under constant stress and anxious (in addition to confused and paranoid with no short- or long-term memory). Last time I saw her, in January, she knew who I was, but wasn't so clear on who my wife and daughter were.
Last time I talked to her, I could tell she didn't know who I was, and she only spoke in garbled sentences.

The morning of her last day, the folks at the group home couldn't rouse her. Her last hours were spent, uncommunicative, in the hospital with the three people that saw her through the the horrible decline that is Alzheimer's – my sister and brother-in-law, and her sister-in-law (my aunt). I did get to speak to her on the phone and I'm told that she reacted with moving eyebrows and a change in breathing, so I feel good that I did get to "talk" to her.

Between two vacations, funeral arrangements one week, and a memorial service the next week (in Binghamton, a three-and-a-half hour drive from Buffalo), and a brief presentation I made at an advertising industry awards show, it's been hectic.

But I seem to have, without thinking much about it, thrown myself into more projects. It keeps my hands busy, and my mind occupied. So I built a slate-tiled potting bench for the outside of the new shed, installed new lights above my kitchen island, repaired three ceilings that had water damaged/water stains on them from years ago, had a new water heater installed, regrouted the kitchen island tile, and finished painting up my bench made from a bed headboard. Oh, and my daughter got accepted into two colleges and got her driver's license. Busy hands make happy hearts I'm told.

I still have a few more projects I'd like to tackle before spring hits in full. But we're going on yet another vacation next week! I don't know how I get anything done. Oh yeah, I'm an active member of two boards and run my own business.

This is why I need so many vacations.