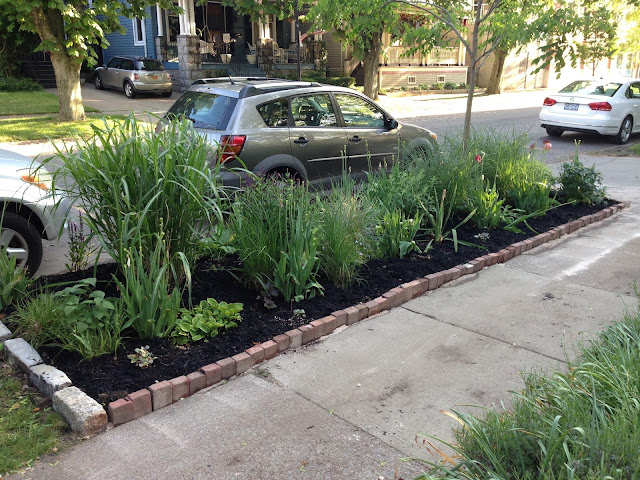 I finally, after many years, finished my hellstrip - the area between sidewalk and road. The spring hasn't been all about the shed!

The "grass" that was there was mostly crab grass, clover, and various weeds. They were all green, so it gave the appearance of grass. For a few years, this strip is the only reason I had a lawnmower, since the rest of the front yard is a grassless jungle of a garden.

So after the tree was planted, I started with a curvy shaped garden with mostly divisions of plants from other parts of the garden, some contributions from friends, and a couple grasses I purchased. It was still surrounded by the lame "grass" that was more weeds than grass. My plan included spending as close to $0 on the whole project.
The next year, I added a brick paver pad at the base of the driveway, someplace for the garbage cans to sit on garbage day. And it got rid of more of the grass. The bricks came from the patio that I added the marble and granite "carpet" to the previous year - so the pavers cost nothing!

The soil here was typical hellstrip soil – compacted, clay-y, dry, and beat up from more than 100 years of salt, dogs, and trampling. Basically, all the compost I've created in my backyard composter has gone here for the past four years. 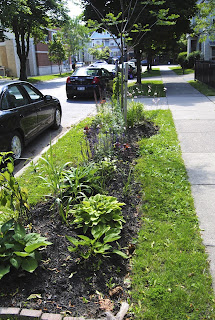 Th estrip looks pretty good now. I have new areas to plant - where the grass was. I want to add low ground covers, as it's the area that surrounds all the taller plants. I've also added tulips this past year that came up – and were spectacular. I do all my spring bulbs in the front yard where we see them more, and the neighbors can appreciate them. We don't use the backyard in the early spring, so they'd be wasted back there.

I'm happy with the way it came out, but because there's a slight grade to the road side, the mulch I put down is falling onto the pavers. I may end up having to add a row of the upright bricks, like on the sidewalk side of the strip.

Not looking forward to that – digging in this area is like breaking apart concrete!