A tour inside the Taj-ma-Shed... 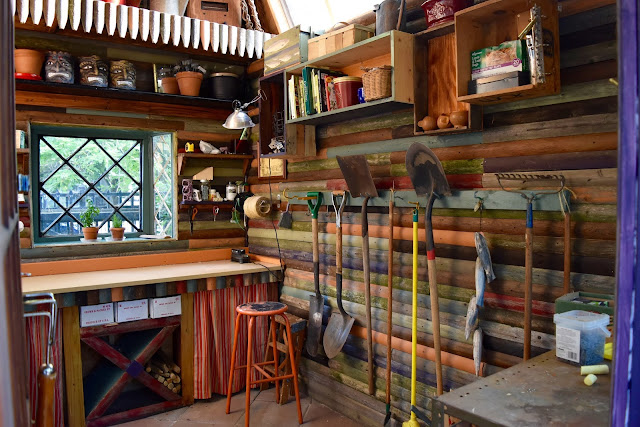 The inside of the 'Taj-ma-Shed" is complete! I built the shed - pounded every single nail, laid every single shingle, cut every board. My wife and daughter did help with extreior painting, as well as held the ladder for me plenty of times, but other than that, I did it all myself. Well, okay, my friend Roger helped me put the counter top on the potting bench - that was HEAVY!

It's complete just in time too – a magazine is sending a photographer tomorrow to photograph it! And another local magazine is coming later in the week to shoot it. Both are for issues to be published next year.

Can't mention names, because I know that sometimes these things don't happen. Once, Martha Stewart Living magazine photographed my garden and the photos were never published. There's some great shots of my garden taken by a Toronto photographer, I've never seen, sitting on a hard drive somewhere in New York City. But I'm not bitter. 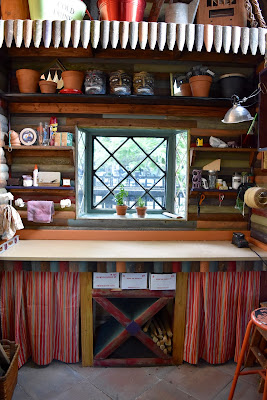 It's also good timing because I'm on Gardens Buffalo Niagara's Tours of Open Gardens starting this coming Thursday - 75+ exceptional gardens open throughout Erie and Niagara Counties for select hours on Thursdays and Fridays in July.

The interior walls are the pickets from the fence we had replaced this spring. I took all the old cans of paint from the basement from other projects around the house and either painted, wiped, dry-brushed, or stained the pickets – then cut and placed them randomly as the walls.

The counter top is Ceasarstone, a man-made material. I had a $500 gift certificate to Italian Marble & Granite I won from their Garden Walk Buffalo contest a couple years ago where they gave away marble & granite scraps from their dumpster to the gardeners of the Walk for garden projects. I won for the marble and granite "carpet" I made as an inlay in my patio.

The fabric panels under the counter are left over scraps from our previous outdoor curtains.

All the windows were our previous attic windows, saved from when we had them replaced with modern efficient windows. They are original to the 1897 house.