The Garden of Eatin' 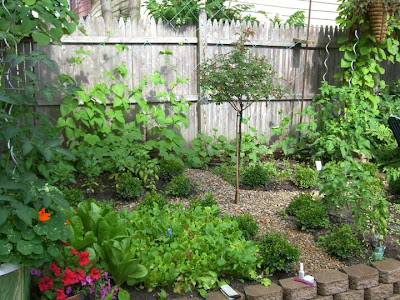 November's Garden Blogger's Design Workshop, hosted by Gardening Gone Wild, is Incorporating Edibles in the garden. I'm late. It's December - which just gave me more time to sort through photos to see what I have to offer. 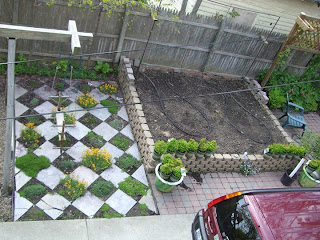 Left: The "before" of the potager. It sits between the diamond checkerboard of steppable grasses (which looks better in this view than close-up.) and the patio.
The single greatest patch of edibles I've incorporated into the design of my garden is my raised-bed potager, shown up top, which is just fancy-talk for vegetables in dirt held in by concrete blocks. I like the idea of adding my own dirt and compost. God only knows what's been dumped in this small city lot in the last 120 years.

Right: the inspiration: Villandry potager gardens, Loire Valley, France.
Rather than having ordinary rows of veggies, I was inspired by a trip to the potager gardens of Villandry, in the Loire Valley of France. I now have symmetrically-laid out quadrants of vegetables, with boxwood-hedge-defined squares of vegetables with gravel paths, a trellis for climbing vegetables, a rose standard dead center, and an apple espalier forming a fence around the whole thing. It's only 12'x10'. You can see a past post and more pictures about it here. You can see my Villandry posts here and here. 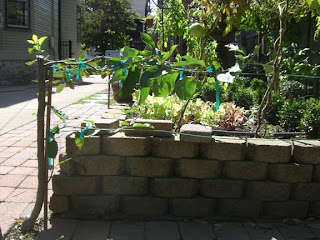 Left: the beginning of a knee-high apple tree espalier to form a low "fence" around the raised-bed potager.
It's young. The miniature boxwoods have not grown enough to create a seamless divider. The espaliered apples have not had a chance to even start branching correctly yet. There's one on each side, and guide wires to encourage two rows of branches. I only put them in last July. Next year I'll be doing a lot of tieing back and strategic trimming. 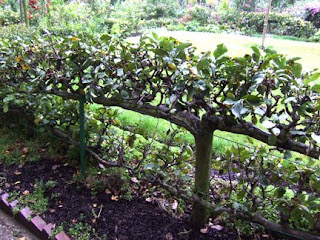 Right: Monet's espalier at Giverny.
The apple espaliered fence is an idea I stole from Monet's garden in Giverny, France, and other formal potager gardens I've visited - mostly in the Loire Valley. Espaliers can actually be traced back to the Romans. 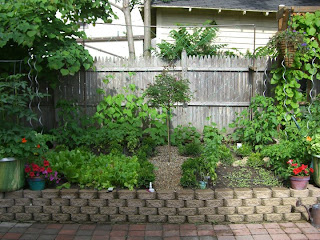 Left: The potager at mid-summer.
As opposed to the normal boring-looking vegetable garden we've had for years, these edibles add even more structure to an already structured yard. It also makes a strong design statement out of an area that was sort of haphazard previously–and looked like everyone else's veg garden. Downside? I have less space for vegetables. 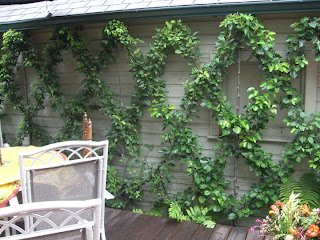 Right: the espalier doesn't take as much tending and nurturing as you would think.
Another edible feature incorporated into the yard is the diamond-shaped pear, plum and apple espalier that forms one "wall" of my deck. It sits against the garage wall. It's very protected there. This was inspired by some great espaliered trees I saw in Niagara Falls, in the park along the Canadian side of the Falls. You can see more about the espalier, and how it was constructed here. Full Disclosure: Other than three plums last year, it's yet to bear any fruit. Here's a post about the tree bait-and-switch and my ignorance regarding fruit.

Left: the Columnar Apple tree.
In the front yard, I have two edibles that add tremendous structure amongst the annuals and perennials. First is another apple tree, this time a columnar apple. Being somewhat space challenged, the apple tree, which is about 12' tall and only a couple feet wide, is the perfect tree for this particular spot. Could have used a Rocket Juniper. This is way cooler.

My favorite edible incorporated into the garden is my horseradish plant. It has the best-looking leaves of any perennial in the garden–narrow, tall (3'-4'), deep green thick leaves with sort of a wavy, hilly surface. Needs little to no propping up. Only nostalgic gardeners recognize it during Garden Walk. It's an old-timey vegetable garden plant. It's a great compliment to a perennial border garden. 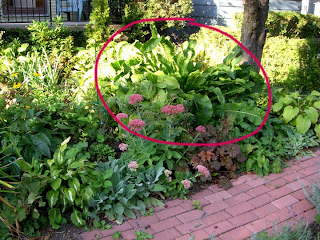 Right: I couldn't find a better shot of the horseradish
It's been a few years since we made horseradish (we call it "ornamental" now), but we have made horseradish sauce from the root. It's really easy - white vinegar and salt added to the ground-up roots. The hard part comes when, after you've ground up the root in the blender, you have to open the blender.

When you open it, run as fast as you can for the next room. The strength of the smell will water your eyes, eliminate all nose hairs and make your ears bleed. Last time we did it, we took the blender outside. This is not an activity for the faint of heart.
Labels: Buffalo espalier Garden Blogger's Design Workshop Garden Walk My garden potager