The sun, as seen from across the street 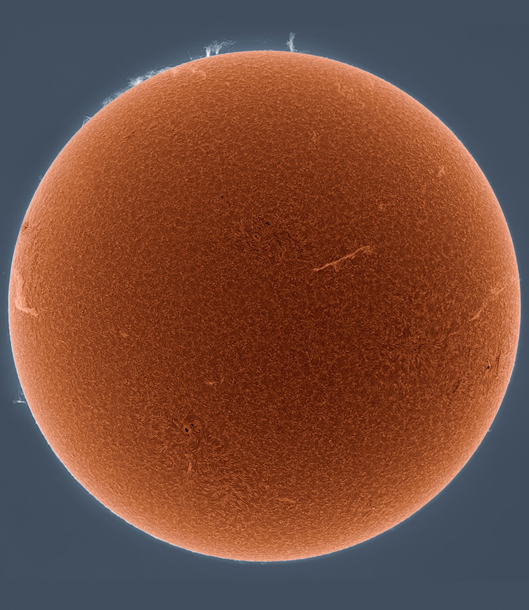 My neighbor, Alan Friedman, across the street and about five houses down, took these photos from his back yard. Alan shot these images on October 10, 2009. The photo at top Alan titled, Not the Great Pumpkin. It looks more like something you'd find in a microscope as opposed to a telescope.


Alan is an astrophotographer by night (and days off), and the president of (and a designer at) one of the country's largest independent greeting card companies, Great Arrow, by day.

Alan has a website, Averted Imagination, you can visit to see more images of the sun, planets and other celestial images. They are enthralling and you'll spend no less than an hour combing through his site studying the rings of Saturn, the pock-marked moon, Jupiter, Venus, and even the Northern Lights here on earth. You can also order high-resolution art prints of some of the photos online.

These images of the sun are taken with fancy filters, are composited from three different B&W shots and colorized. It's all very technical and sciency, but much like fine art, the awe is in the final result.

This series of the sun images made their rounds back a couple months ago and could be seen on DiscoveryMagazine.com, Huffington Post, Wired.com, and even the Today Show (video below). Alan was kind enough to allow me to use a few of his images here, but really you should be visiting his site.

According to the National Climate Data Center, with records going back more than 52 years, Buffalo, NY has an annual average of 54 absolutely clear days, and 103 partly cloudy days. The percentage of sunshine from June through August in Buffalo is a rather high 67% (according to the National Weather Service), making for a great place to grow plants, and photograph the heavens.