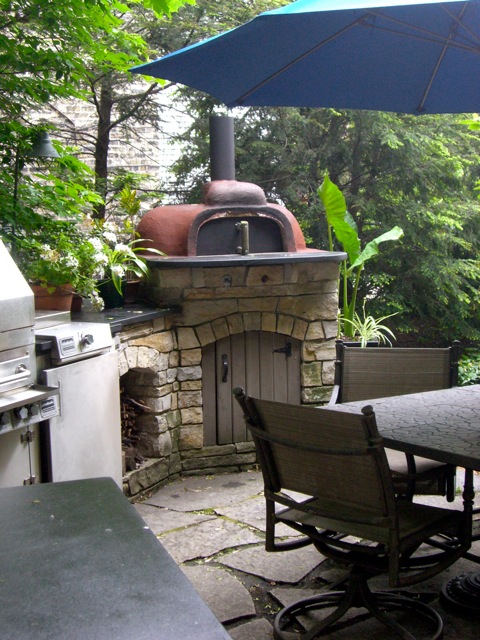 "Rick Bayless is award-winning chef-restaurateur, cookbook author, and television personality and has done more than any other culinary star to introduce Americans to authentic Mexican cuisine and to change the image of Mexican food in America." That's from his bio. I didn't know any of that when a group of about 50 garden bloggers descended on his garden in 2009 for the Garden Bloggers meet-up in Chicago. In Chicago, he's very well-known for his restaurants Frontera Grill, Topolobampo and others.
His star has risen even more since then. Being one of the Obama family's favorite hometown chefs, he prepared the meal for the Whitehouse's state dinner honoring Mexican president Felipe Calderon last May '10. Not a bad gig if you can get it.
For a voyeur gardener like myself, getting a chance to see the garden where he cooks, entertains and grows food for his restaurants, was a good gig too. He was not there when we were, but the gardener in charge of the garden was, and showed us around. The production garden and plantings are taken care of by a gardener and one assistant, as well as by Rick himself, given the time.
This garden was one of the highlights of the Chicago trip. I hadn't posted about it back then because 49 other garden bloggers did, and I felt I didn't have much to add. We'll, that was about a year and a half ago. Time to post!
Not only is this a casual blend of perennial garden & leisure space, but it's a production garden for his restaurants. This generous-sized city lot provides thousands of dollars worth of baby lettuces, vegetables and herbs for his businesses. I was most impressed by the micro climate growing conditions of the garden, which they have down to a science. Exacting sunlight conditions are known for every square inch of the place. Temperature fluctuations throughout the day, reflected heat off a large stone wall abutting the garden, and where shade falls at different points of the day are taken into consideration when deciding what and when to plant. It's 100% organic, takes advantage of rain barrels and they make all compost on-site.
Labels: Chicago espalier Famous People's Gardens travel vegetable garden visit