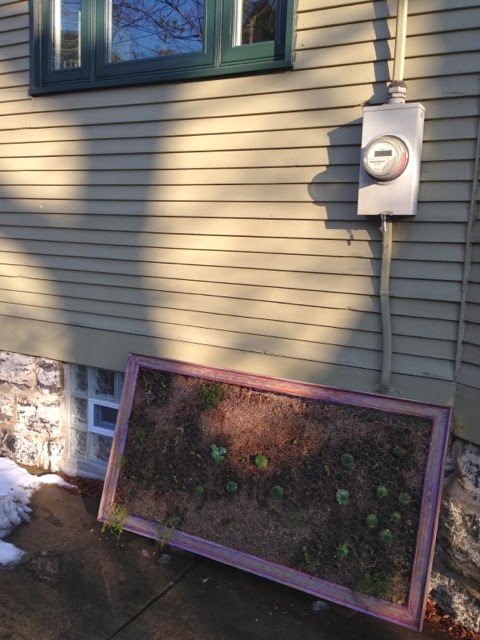 Geez, I haven't written a post since December 10. Someone may come and take my garden blogging license away. I have however, been very busy with garden-related things, even though it's the heart of winter.
I had put zone 5 hardy succulents on all my Christmas and birthday lists for anyone that cared to ask – all both of them. My daughter came through in spades, as well as other family members. Below are some of the plants I got for birthday/Christmas. I also got a gift certificate to Mountain Crest Gardens - an online store for succulents where regular folks can order wholesale trays of hardy succulents.


The one thing that I didn't realize, that I really should have, is that it was not a smart thing to be growing the succulents I had in the frame already in the (relatively) warm basement with grow lights. The helpful horticulturist at Mennes Garden Center had strongly suggested to my daughter and wife that I bring the frame outside, as hens and chicks, and other hardy succulents NEED about 16 weeks of dormancy in cold, minimum-daylight weather. Which, after they told me, makes perfect sense. That's way they are hardy - they need winter!

As a matter of fact they had to buy dormant Hens & Chicks at this time of year. So what they gave me look pretty unimpressive–but they were also half price!

So I carried the 5'x3'x4" frame full of soil, all 18 tons of it, across the basement, up the stairs, around a corner, and out to where you see it in the top photo. My back still hurts. Beauty is painful.

It ultimately will hang on the house below the window you see in the photo up top. It's the same width as the window. When the weather breaks, I'll find some way to pin them to the frame to root, or maybe even keep the frame flat letting them root for a few weeks in the spring to get firmly attached. I fully expect to have to pin some on once it's up and hanging to fill in spaces.

On the plus side, while bringing it up, only one Hen & Chick fell off, which means they were rotting decently. But now maybe they'll catch up on their winter sleep and be even stronger in spring.
Labels: My garden