The floating tree of Jaffa 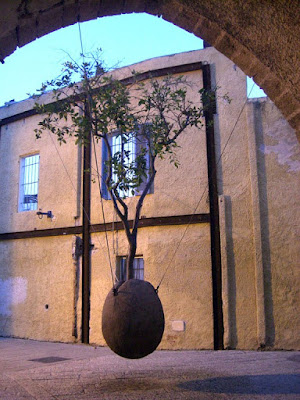 We spent last week in Israel. We stayed in Tel Aviv. Just a short walk down the boardwalk, along the Mediterranean, is the small area of Jaffa, named for one of Noah's sons. Once Jaffa was one of the most important sea ports in the world, now is a quaint "artsy" neighborhood within the ever-sprawling Tel Aviv. 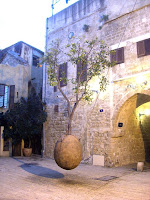 Walking through Jaffa, we came upon this hanging tree. No signs leading up to it. No explanation why it's there. No over-wrought interpretive signage in multiple languages with an artist's statement. Not even any other trees around. Just a lonely tree suspended in the air, separated from the earth by inches.

According to Greek mythology, Andromeda was chained to a rock just off the coast of Jaffa -- a sacrifice to a sea monster as a punishment for her mother's bragging (but was saved by Perseus, her future husband). Here, also, Jonah was swallowed by the whale. 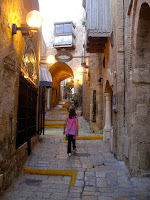 While in Israel, we were able (with excellent tour guide Mimi) to visit Jerusalem, climb the Masada, float in the Dead Sea, drive through parts of the West Bank, see the Holocaust Museum, visit Haifa, Nazareth, the Sea of Galilee, and Qumran (site where the Dead Sea Scrolls were found).

It'll take months to comprehend all we saw and learned. My daughter's take-away was that she likes falafel, and that any place Jesus did something, they built a church.
Labels: Isreal travel visit