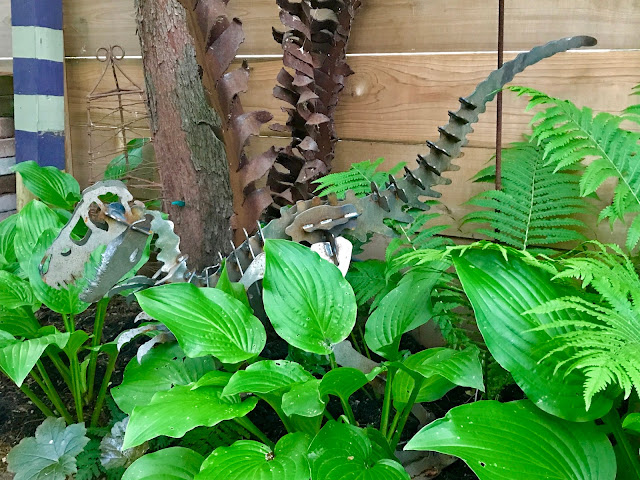 I think I'll call him Rex. He was my big purchase this year at the Buffalo-style Garden Art Sale. Each year of the sale that I help organize, I try to purchase one new piece of art. Rex was it. He came in a much larger size, which was tempting to think about, but not practical budget-wise, or even space-wise.

This year's Garden Art Sale was a big success. It was our fifth annual sale. It's a part of Gardens Buffalo Niagara's garden-related events and tours. There's seven of us on the committee and we work on it almost year round. It's held the last weekend of June each year, on the Grounds of the Buffalo & Erie County Botanical Gardens. Next year it will be SAturday and Sunday, June 30 and July 1.

We also had a few food trucks on hand both days, and a live three-piece rock band singing popular covers and a few original songs. We also had area plant societies, clubs, and the Master Gardeners of the Cornell Cooperative Extension Erie County.

Three vendors sold so much of their wares on Saturday, they had little to nothing to sell the next day. One vendor, from Ohio, had nothing left at all! His rustic field rocks planted with sedums and hens & chicks all went. He packed up and left. There were a few other vendors that didn't do smashingly on Saturday, but things had turned around on Sunday for them. Two vendors gave up and left in the darkness of night on Saturday night. Their loss – though it left some empty spaces that didn't look good the next day. They had paid their booth fees for two days, so we weren't out revenue. That was good at least.

I also bought a solar sconce, to the left here. Different by Design was the seller. Her stuff is really cool, but most of the colors, as attractive as they are, are a bit too bright and lively for my own garden. I found this nice little sconce that has already found a home on the deck.

One of the sellers that nearly ran out of items was Heart of Franklinville. They make dyed concrete statuary. Someone came an purchased just about everything they had. All he was left to sell the following day were small concrete pieces. Large statues and birdbaths were cleared out. So I got this small toad. He will sit in the Harry Potter Garden, replacing Neville Longbottom's toad Trevor. The previous Trevor was resin. New Trevor looks much nicer. If you don't know Trevor, you're a Muggle and will never know.

Below are photos of some of the other vendor's products at the sale. It was a good weekend - wind was a little too blow-y, but it didn't rain. On to next year! 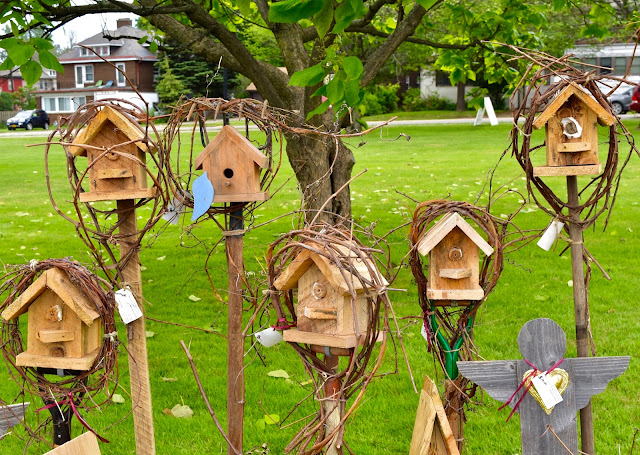