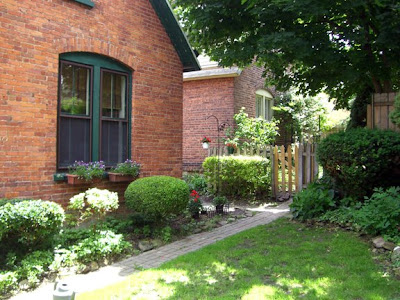 In the Cottage District of Buffalo, a quaint area of Civil War-era small cottages, there are three very special "secret" cottages tucked in behind other cottages & homes. The only access is by a passage in between the houses that face the street. There are no driveways (which would be a deal-breaker for me). You cannot see these cottages from the street. 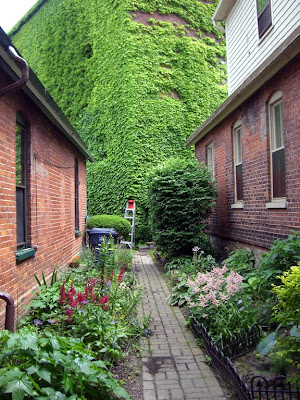 The ivy-covered stable backing the back yards of cottages #2 and #3.
One of these houses is owned by Bunny. Bunny, and her late husband, Harold, first saw this house when they attended Garden Walk years ago. One of the cottages was for sale. They were so impressed with the cottage, garden & tightness of the neighborhood, they bought the middle cottage, Cottage #2.

My best friend (and best man at my wedding) owned Cottage #1 for a while. He didn't do much gardening, although his new wife did. Before they had the triplets and had to move out because the place had grown too small. Triplets will do that to a place. 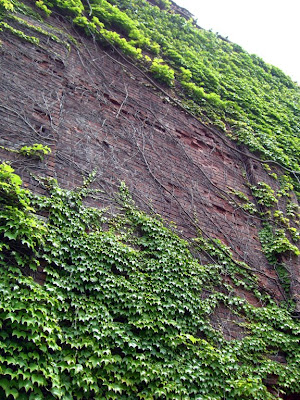 120-year-old bricks fell from the sky.

Bunny's issue last year, aside from the passing of Harold, was the crumbling bricks from the three-story tall, 1889 livery stable that backs against the back yards of all three of these cottages. Whereas the vine-covered stable provided the privacy and character of the mini-neighborhood, falling bricks didn't add to the charm. 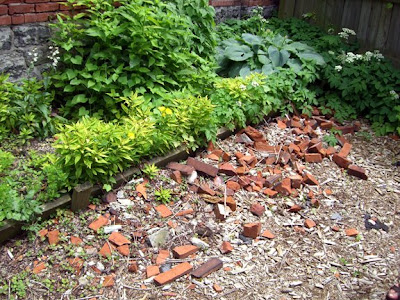 Falling bricks are not good for plants.
These homes are just down the street from Ellie's Alley. I rented a cottage in front of these cottages from 1987-1991. It's a great neighborhood of wonderful little homes and wonderful people. 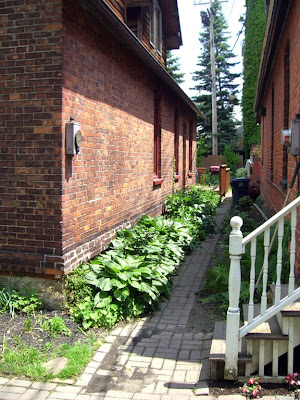 The livery stable was purchased from the owner that had let it deteriorate for more than 20 years and has now been stabilized. It was used as auto storage previously. It is now being redeveloped into condos & rentals.

Bunny's little hide-away is a popular stop on Garden Walk. There are often lines to see the hidden gardens of these three secret cottages. And, in a future post, I will show off one of her neighbor's gardens - in the house I rented way back when. And Bunny's neighbor? Her name's Kitty.

Below: The front garden of cottage #3. 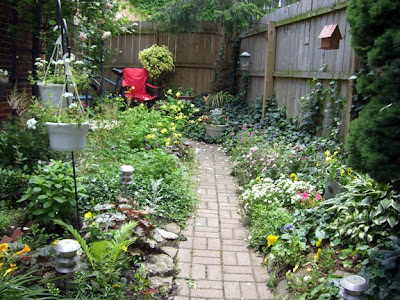