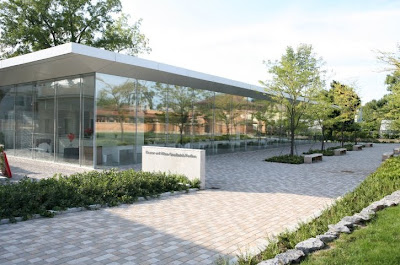 Toshiko Mori's Greatbatch Pavilion - a building that has been called a "technical tour de force" to parallel Frank Lloyd Wright's revolutionary design for the Martin House.

This year, being our fifteenth anniversary, the Garden Walk Committee threw a party for the gardeners, volunteers, and committee members of the Walk in the brand new Darwin Martin House Greatbatch Pavilion. 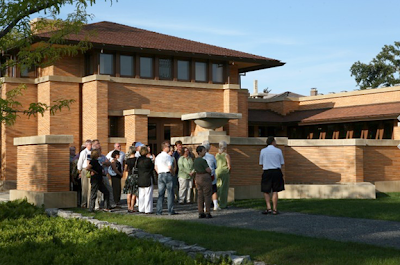 First group of tours finishes up and are ready for drinks.

Not only did we throw a two-hour wine & hors d'ouvres party, but we also provided free tours of the Wright's Martin House, the design of which Wright considered his "opus." The facilities manager, also the owner of a local popular garden center, Arbordale Nurseries, was on hand to show historical photos of the original gardens on the grounds of the compound and was able to not only talk about the restoration -- but drafted a few volunteers to help with the effort! 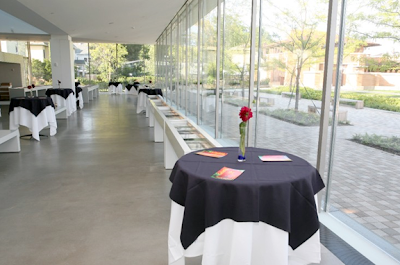 The Greatbatch Pavilion is a special building in that it almost disappears. From the floor-to-ceiling windows to the absolutely silent mechanical services you barely know you're inside a building. It looks onto and accentuates the horizontal aspect of the Martin House.
It was no small task to coordinate tours for 160+ people through a large house with many opportunities for traffic jams. Volunteers were stationed to help the flow of the roughly one-hour tours. As soon as a group of twenty were gathered, they went on the tour, next twenty to gather were right on their heels. Everyone was completely done in about and hour and 45 minutes. All went swimmingly, thanks to the great tour guides and tour coordinators. 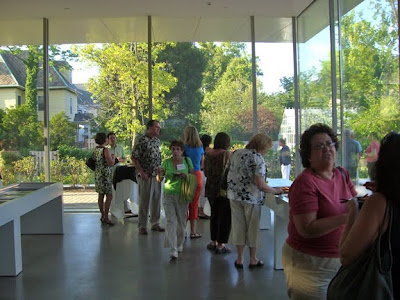 Being inside the Pavilion even looks like you're outside.

Due to overwhelming response, and tour & room capacities, some RSVPs after the RSVP date could not be accepted. We apologize to those gardeners and volunteers that really wanted to come. And for the people that RSVP'd and didn't show (and we still had to pay for)? We'll be sending the gardeners we had to turn away over to YOUR house.

Every year, within a few months after the Walk is over, the organizing committee throws a "Thank You" party for the gardeners that are so gracious to open their gardens each year. It started off many years ago with cases of beer and bags of chips in a back yard. 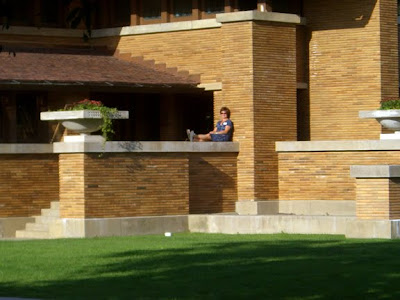 That's my Senior Assistant Junior Garden Supervising Groundskeeper (and garden financial adviser) acting as traffic manger at the front door. To my knowledge, there were no tour group accidents, mishaps or emergency room trips. Though she is defibrillator-qualified.

As Garden Walk has grown, so has the party. Past years have seen the parties in church halls, bars and more recently, in different gardens around the Garden Walk area, hosted by the host gardener and the GW Committee (gardeners don't often get out to see other gardens!).We also did a block party, closing off a street allowing gardeners to peruse a block of gardens they might not ever have the chance to see otherwise. 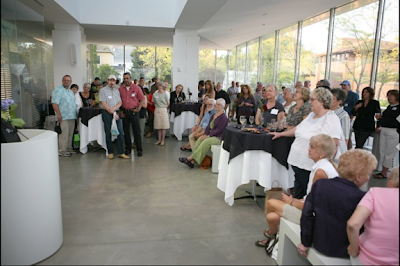 We tried to keep the comments & announcements brief, but we've never had a captive audience this large AND had a microphone.

This was a big deal for us in time & treasure and it went off without a hitch -- special thanks to the support for the event & tours. Schuele Paint, a Buffalo institution; and JCharlier Communication Design (me) picked up the cost of the tours. Gates Circle Liquor, another Buffalo institution, donated the wine. The Martin House Restoration Corporation was generous with use of the Greatbatch Pavilion and discounted tours from their excellent cadre of volunteer docents.

We encourage all to take the 2-hour In-Depth tour when you're able to be able to see the upstairs of the house, the Barton House and Gardeners Cottage which are all part of the Martin House compound. 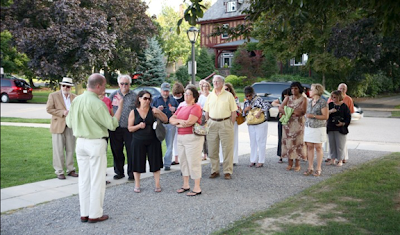 A tour starts outside the building. The neighborhood was laid out by Frederick Law Olmsted, with curving streets so as not to see the busier streets that bookend the neighborhood. The Martin House is so close to the Buffalo Zoo that you can hear elephants & lions at night.

If you're part of a local company looking for a unique party/holiday celebration/treat for employees, I highly recommend considering the Martin House tour and a party in the Pavilion afterward. The more local people to tour the house, the more advocates the house will have out in the world. If you're coming to our neck of the woods, the Falls are a must, but so is this house (it's actually more of a mansion, albeit a Wright version of a mansion). 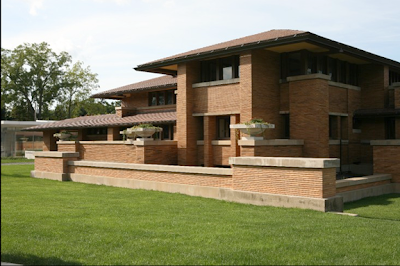 The house still has a ways to go before it is 100% complete. The exterior grounds will be restored to its 1904 original.

You can find photos of the event here, taken by photographer Don Zinteck of Photographics 2, on the events portion of his website.
Labels: Buffalo Buffalo Fling '10 Garden Walk Olmsted Parkside visit Wright