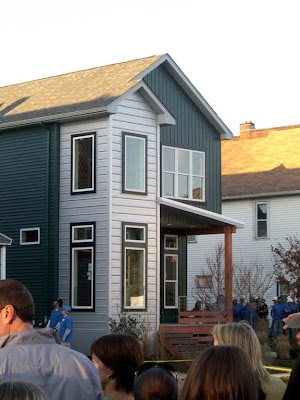 We went over to the site of the Extreme Makeover house yesterday. Top photo shows as close as we could get. Today is the big reveal to the home winners. It'll be more of a zoo than it's been all week, so we'll be avoiding the neighborhood. 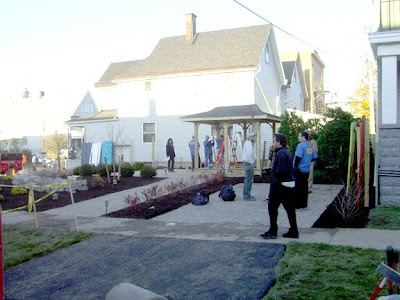 This community garden, which wasn't there a week ago, has cobble stone paths, a gazebo, trees, shrubs and lighting. The neighboring house got a new parking pad. I'll get back there sometime soon to get more pictures. They were filming and we couldn't get too close.
As part of Garden Walk Buffalo for twelve of its fifteen years, and president for four, the Garden Walk committee has quietly gone about with a similar mission. In our marketing materials we say, "Garden Walk rejuvenates streets, re-energizes neighborhoods, increases property values, and takes the chill out of Buffalo's image." But I've never seen anything like what's happening on Massachusetts Avenue.

The level of goodwill and volunteerism has not abated throughout the week. It's only gotten more intense.

More than 40 houses around this one new house have had everything from paint jobs to new roofs - at no cost to the owners. It's not ABC's Extreme Makeover Home Edition doing these, the TV show was just the spark that ignited all these Buffalo companies and volunteers. In fact, so many people volunteered or even just showed up with tools, that rather than turn them away, the home developer that took on the house (David Homes) started sending them to nearby houses - and the "Miracle on Massachusetts" started.

Most of these people would not have known even where Massachusetts Street was on the West side of Buffalo. Now? They have great stories to tell - and they have some ownership of the street, having been part of this effort. 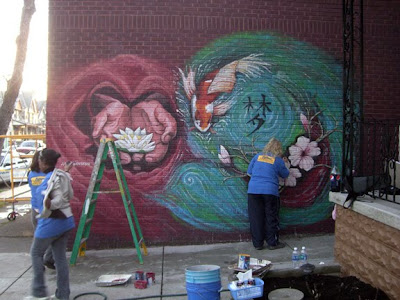 Some good deeds I learned about last night? The mural you see being painted is covering up former graffiti. The artist traveled here from Pennsylvania to take part in the neighborhood rejuvenation. She found out the owners of this building are from Laos and designed and started painting this Loation-themed wall mural.

My friend, (and client!) Joy Kuebler, a landscape designer has been there all week helping construct & consult with landscape issues. She's also lead on getting the new garage roof to be a green roof, planted much the same way her own studio's roof is. 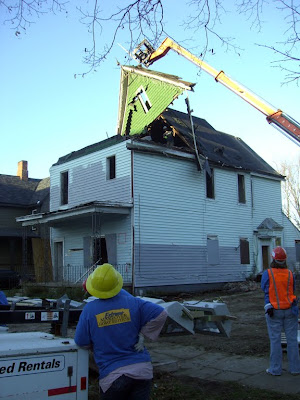 Not content to tear down one house, Buffalo ReUse dismantled this neighboring abandoned home in 14 hours.
Buffalo ReUse, our local home materials reuse non-profit, decided to dismantle another house around the corner. The materials from this house will be used in community gardens and be sold in their store to keep them in business. They are the first company to ever do a "green deconstruction" for the Extreme Makeover TV show. This event has kicked of a green jobs initiative here in the city. The two deconstructed buildings were used to train men & women from the Minority Contractors Alliance to track the material used from the makeover home to be sold later.

And how do you feed 5,000 volunteers for a week? The food coordinator brought in for the week, a teacher at the Culinary Institute of America, located locally in St. Mary's School for the Deaf, brought in his students to get some real-world catering experience. They're also helping to build a gazebo in a community garden when not preparing meals. 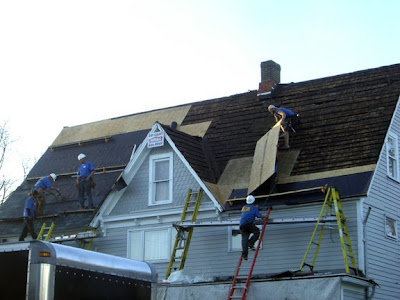 You can see here the roofers precariously doing a tear-off and complete redo of a roof on a building at the end of the block. It's a steep roof. And big. And done for no charge to the owners. 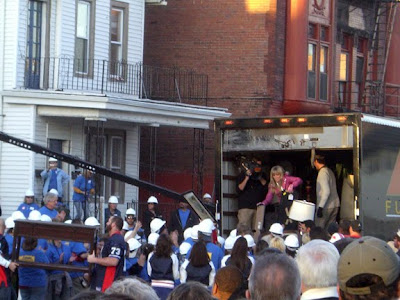 Here you can see pop singer Ashanti and 10 of the Buffalo Bills and Jills cheerleaders emptying the truckload of gifted furniture from Ashly's Furniture HomeStore. Former Buffalo Sabres Larry Playfair and Rob Ray were actually onsite and working during the week.

Even the Gods were being generous this week by providing chamber-of-commerce-like weather - clear blue skies and warm days in the 50s. Not our norm for the second week of November.

The house next door to the Extreme House hadn't had water service for two years. He now has up-to-date and up-to-code plumbing throughout the house, thanks to a local plumber. 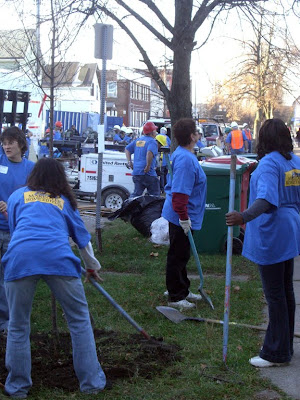 One resident put out all her Christmas decorations this week. When asked why, she said Christmas came early for their neighborhood this week.

Another local company (Save-A-Lot) stepped up and was delivering turkeys and complete Thanksgiving meals to the nearest 120 homes to the Extreme House.

My friend Nancy is handling the PR for the event on-site this week. We asked how she can look around, hear these stories and not tear up. She said just about everyone has. The hardest part for the people she'd been dealing with is not having people tear up in press interviews.

Today Ty Pennington gets the crowd to yell "Move that bus." When, in actuality, the crowd moved a city.