Disney only does things in a big way.
This 145’ tall (that’s 13 stories!), 170’ to 50’ wide, artificial tree is the centerpiece and icon of the Animal Kingdom Park, the largest of the Disney parks in Orlando. It is a refitted oil platform, believe it or not, and engineered to withstand hurricane-strength winds. 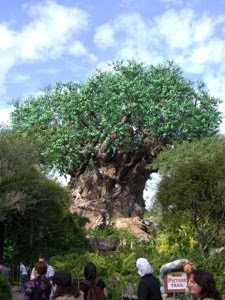 Each branch unit does have an expansion joint to encourage life-like movement. You know, keepin’ it real.
The 103,000 leaves of many colors, and four different shapes & sizes, are made from kyner (polyvinylidene fluoride, the homopolymer of 1,1-di-fluoro-ethene (VF2) – THAT sounds environmentally-friendly). The substance is a thermoplastic that is stable in harsh chemical and ultraviolet environments. The leaves were attached by hand onto the more than 8,000 branches. It took 18 months to build.

The design of the 1998 tree is based on Rafiki’s tree in the movie The Lion King. It has 325 different carvings of endangered and extinct animals, created by more than 20 international artists, sculpted into its trunk and painted to look like tree bark. The sculptures are actually quite beautiful. There’s even a hidden Mickey in the tree, although he’s hardly among the endangered. 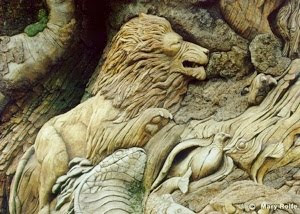 Legend has it that there were originally 324 animals sculpted into the tree until Dr. Jane Goodall visited and commented that there were no chimpanzees on the tree, so they sculpted one more – of her favorite chimp, David Graybeard.

The cave-like base of the trunk is, appropriately enough, the host of It’s Tough to be a Bug!, a 3D film and interactive, 430-seat stage show, based on the movie A Bug’s Life. 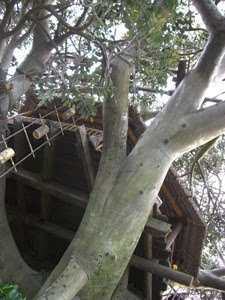 The banyon tree look-alike “residence” has bedrooms, kitchen, family rooms, library and dining areas and a winding staircase to connect them all, fully-furnished in a cast-away chic elegance style. Any fan of the movie, and come on, who isn’t, will recognize the waterwheel/pully-system for plumbing. 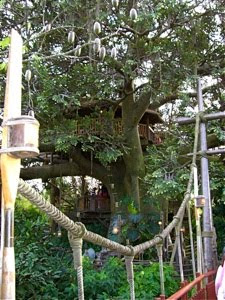 This tree was made of steel and concrete. It is 90’ tall with a canopy diameter of 60’. The “root” support system goes 42’ into the ground. There are 330,000 polythene leaves, attached by hand, on 1,400 branches. This tree does have real Spanish moss on it for effect.

The species of tree is listed as Disneyodendron eximus which translates to “out of the ordinary Disney tree.”


This is a favorite old post, created before I was on Blogger. I repeat it here to save & catalog it on this new site. Sorry if you've read it before.
Labels: Disney travel visit