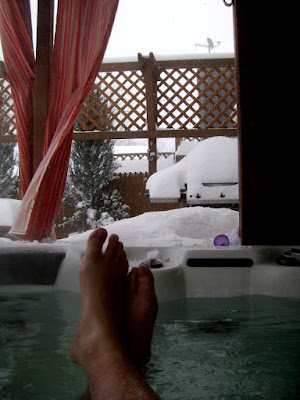 I have yet to ever mention much about our year-'round garden water feature, the love of my life, the hot tub. Sunday was 17 degrees, with gusting winds up to 45 mph. But my daughter and I spent a good hour (and I mean good) relaxing in the outdoor tub. 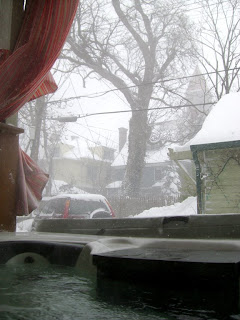 When the weather outside is frightful, so are we. Not frightful, but outside.
We'd always loved taking advantage of hot tubs in hotels in our travels, always aware that we're sitting in someone else's (hopefully over-chemicalized) bathwater. Always telling ourselves it would be great to have our own.

After having discussed owning one for 16 years, and after having built our deck, we took the plunge. The area where it sits was an enclosed porch when we bought the house. My wife, Destructor, un-built the porch when we started the deck, leaving just the base and roof. For two years, it was an barely-used landing outside the back door.

I hired a carpenter to build the tub into the existing porch / landing. It was beyond my weekend carpentry skills. Especially when there are electrical concerns, lode-bearing pillars and the like. The tub actually rests on a platform that is sitting on the ground on a bed of gravel. It took five guys just to set it in place.

The industry likes to call them "spas." Too many 1970s hot tub party connotations, I guess. Or maybe they can sell them for more money. We started reading up on the Internet to educate ourselves then went looking. 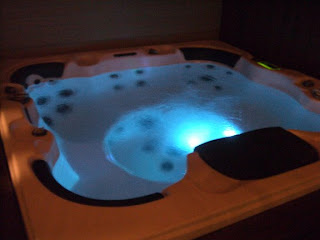 Number of seats and jets and jet positions are two of the most important options to consider.

There's a lot to choose from. The biggest factor in deciding on one for us was size. It had to fit in a specific area of the deck. After that, it was number of seats and number of, and location of, jets. We ended up with a "seven-seater" that has seats in four corners, plus three ledges between the seats. There is no way I'd ever consider having seven people in there. There are not six other people one earth I'd want to be that close to. There's my wife. There's Halle Berry. There's Charlize Theron... and I can't think of any others. 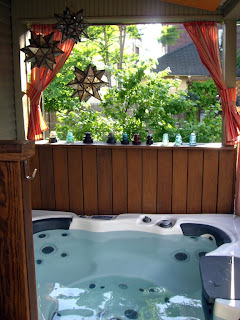 The "Spa" in better weather.

Other options included flashing disco lights, aroma therapy and sound & video systems. They were not even a consideration.

The best advice we were given was to make sure the pool is placed as near as possible to the back door. The further it's placed from the door, the less it would get used. People with romantic notions of a secluded area of the yard with a tub get quickly disillusioned the first time they have to make a mad scramble through winding paths, gravel walkways or a frigid wind-swept, large, grass lawn. Ours is one step from the back door and it gets used 3-4 times a week. 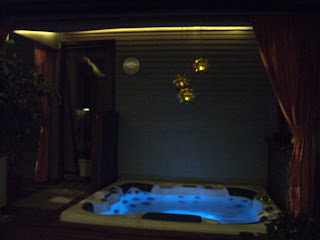 Night time is the best time for a dip, it's quiet. Well, except for the cars along busy Elmwood Ave., just a house or two away.
I also spent some time considering the lighting. There are some Moravian star candle pendants above the tub. There are rope lights hidden by a fake soffit around the exterior of the ceiling and then there's the light inside the tub. The light inside the tub can be set for different colors. Most are okay. I do not recommend the yellow light. Yellow water is not pleasant (conceptually) to bathe in.

We have a 10-year-old that has friends over, so we've established a few rules.
And for kids and adults: 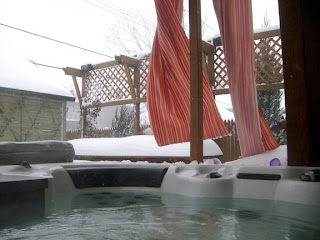 My wife made the curtains. She was skeptical at first, and was going to sit back and watch me make them from outdoor fabric, but soon took over the job (sewing is not one of my many talents). She liked them so much, she made a 10' long picnic tablecloth from the same fabric and covered the top of our daughter's jungle gym so the whole yard now coordinates.

The tub gets used more, surprisingly, in the wintertime. Our house is a big old 1897 Dutch Colonial. It's drafty and the first floor has no interior doors–it's wide open. The cold starts in your hands and feet and travels inward from there. The tub is instant relief. And after shoveling? There's nothing better. And it has become the winter finish line for my wife and her running friends. 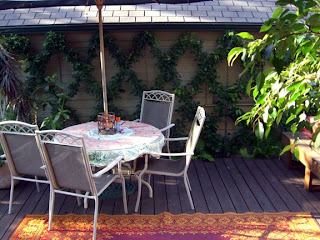 The summer-time view from the spa into the dining area of the deck.
The tub stays at 104 degrees in the winter. It goes down to 102 or lower for the summer. It does take some maintenance–chemicals every week or so and hosing out the filters at least once a week. It gets drained, cleaned and refilled every three months or so (the "or so" part depends on a January or February thaw). In retrospect, I wish we had a water spigot closer by. I am dependent on the hose not being frozen to clean filters and supplement the water level. 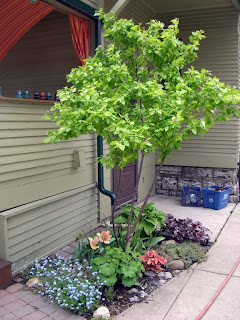 View of the tub is hidden from the driveway. The motor & pumps for the tub are accessible behind the removable panel lower, behind the tree in the rock garden.

It does bump up your electric bill a bit. The sales people will tell you about a dollar a day. It's closer to $1.30 a day for us. But it is determined by a number of factors - what temperature you keep it set for, your weather and how protected it is.

Ours has a roof over it, which protects it a bit. My neighbor has had a spa for more than 20 years and his greatest expense has been the spa covers. They get beat up by the elements. His is not covered and goes through them every six years or so. 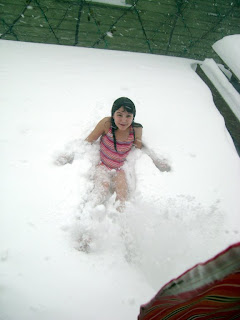 It makes bathing-suit-attired snow angels bearable, if you're man enough. Or childish enough.
For privacy, there are the curtains, tall walls 3' above the tub about 75% of the way immediately around the tub, 6' stockade fence around the property and 10' tall vine-covered trellises in areas within view of neighbors. There's also a locking, rolling, fence gate on the driveway to ward off unexpected guests from appearing.

We do not regret the purchase one iota. It's probably the only "luxury" item we own. If you're mildly interested in getting one, don't spend 16 years deciding.

A spa, or the expense, or the maintenance is not everyone's cup of tea, some people just find them icky. Do you have a hot tub/spa? What's your experience? Do you want one?

Labels: back yard House My garden