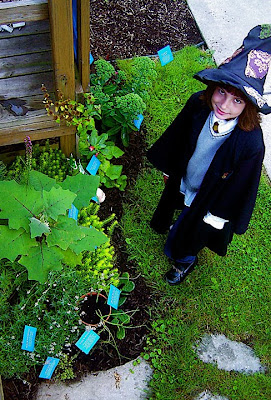 Gardening Gone Wild's Garden Blogger's December Design Workshop is Kids in the Garden. This is sort of a re-post – a concoction made from multiple posts about my daughter's Harry Potter Garden over the last year–sort of a Frankenpost. Let's call it a remix with special bonus features. I have added the names of the plants and their descriptions, which I'd never published before.

For Garden Walk Buffalo each year, my ten-year-old daughter, Margaux, and I, buy the oddest-looking plants we can find when we’re doing the nursery rounds in the spring. 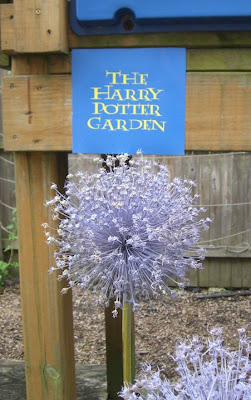 We plant these in her garden and give them all names of plants that can be found in the Harry Potter books. A pencil plant becomes Gillyweed (Looking like slimy, greyish-green rat tails, it tastes slimy and rubbery, like octopus tentacles. When eaten, causes the user to grow gills, webbed feet and webbing between fingers. The effect lasts for about an hour.)

A funny-looking sedum become Bubotuber (Thick, slug-like plants. It is normal for them to squirm, covered in pus-filled swellings. The pus itself creates severe irritation on the skin – dragon-hide gloves are suggested. In a dilute form it may be used as a cure for acne.)

A redbud becomes the wand-making hornbeam, an over-wintering cactus becomes stinksap-spewing mimbulus mimbletonia. Morning glories become devil’s snare (which seems a more appropriate name for them anyway). Add in some fluxweed, scurvy grass, venomous tentacula, gurdyroot and a puffapod and we have well-labeled and documented plantings for our visitors. 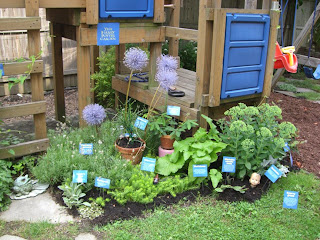 Located conveniently at the bottom of the jungle gym that was here when we bought the place, the garden was started three years ago, slowly taking over what is the only remaining bit of grass on our property.

The Sensitive plant was a big hit during Garden Walk this year. Whenever bored kids were dragged into the yard by parents or grandparents, rolling their eyes and wanting to be anywhere on earth–except a garden tour–we would bring them over to the Sensitive Plant and let them touch the leaves to watch them fold closed.

After a day of being told not to touch any plants, this was a welcome relief. Many kids came back to our yard, this time dragging their parents, to play with the plant again.

This year, we also took dried Allium seed heads and spray painted them purple and stuck them throughout the garden. In the photo below, you can see the doll's head with the fake ivy coming out of it. Any Harry Potter fan will recognize that as Mandrake. There's also a motion-sensor frog that croaks when you move in front of it, named Trevor. (Named after Neville's pet frog. Don't know who Neville is? Ask a Harry Potter fan.) 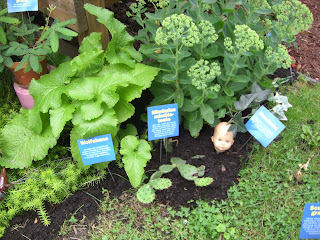 Parts of this post, and the photo at the top of the post, were originally published in People, Places Plants magazine, a magazine for northeast gardeners, based in Maine, in their Spring '07 issue. Before that, it was a comment on Garden Rant. The photo at the top of the post was taken by Ann Casady, creative director for the magazine at the time.
The best part is to see regular people (muggles) reading the tags and taking notes and photos during Garden Walk, one person even asked where they could buy them. That's when I have to break it to them that this is a fictional garden.

Below are the names and descriptions we use on the plant labels. Some are actual plants–with fictional descriptions, such as Wolfsbane, Hornbeam and Mandrake. Lamb's Ears and Sensitive Plant are my additions. They already sounded like made up plants.
Do you have any Harry Potter-ish-looking or weirdly named plants in your garden?
Labels: back yard Garden Blogger's Design Workshop Garden Tour Garden Walk Harry Potter Garden Houseplants My garden