The REAL crown of thorns... 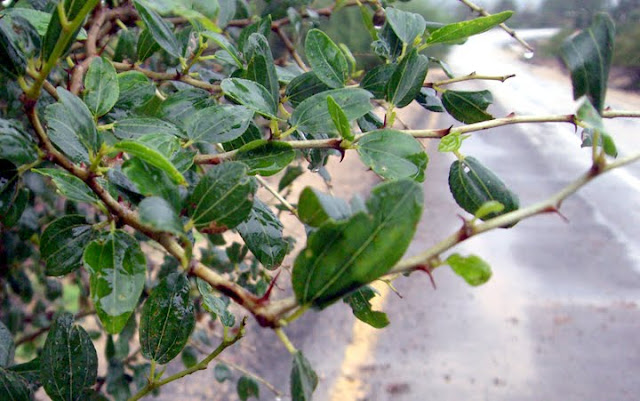 When we were in Israel this past January, our tour guide knew I was interested in plants & gardening. While driving through the Beatitudes, the hills along the Sea of Galilee, she suddenly pulled the car over so I could see the bush/tree of which Christ's crown of thorns was made. 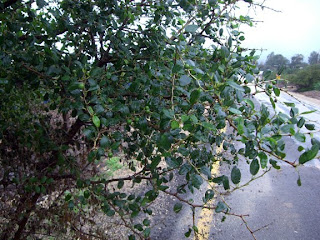 Here's the tree we "sampled" by the side of the road. I was so taken aback by the quantity of banana trees in this area of Israel, that I hardly noticed these unassuming thorn trees that are all over the place. But I can tell you that the only thing Israel has more of than religious sites, is banana trees!
It's called a jujube tree (Ziziphus spina-christi) and it grows to about 15-20 feet tall. It is deciduous, has small yellowish-green flowers and produces small fruit with the consistency & taste of an apple. The fruit matures to dark red to black, wrinkled, and looking like a small date. The fruits are used in Chinese & Korean traditional medicines to alleviate stress. The dried fruits are eaten as a snack or with tea. I tasted the fruit (it was apple-y) and smelled the crushed leaves. Didn't relieve any of my stress, but it'd take more than a thorn tree fruit to do that. 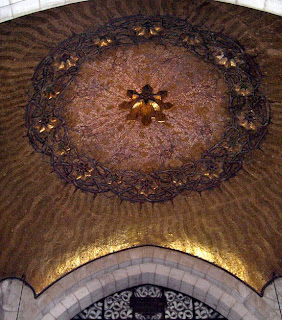 The ceiling relief sculpture in the Church of the Flagellation is of the Crown of Thorns, super-sized.

We did get to see the spot where the Crown of Thorns was placed on Christ's head. Well, not the spot on his head, but Station II of the Cross, on Via Dolorosa, the Church of the Flagellation. Here he was flogged. The Church is in the Muslim Quarter of Jerusalem and is part of a Franciscan Monastery.  It's just across the street from Station I of the cross, where Pontius Pilate's judgment of Christ took place. Though there is speculation that this is probably not the actual site, but it makes for a good story and it's been believed to have happened there for so long, it's hard to convince the devoted otherwise. The Church of the Flagellation was built in 1839 over a medieval crusader shrine, which at some point previously had been homes & stables. The current church at the site was built by 1929 and is a reconstruction of the original shrine.

This was all new to me - being raised Methodist, and currently attending an Episcopal church, the stations of the cross were something I was vaguely aware of but had no major significance to me. But I liked finding out about the plant behind an historical icon.

There is a house plant (in my zone anyway) called Crown of Thorns (Euphorbia milii spp) but that is a completely different animal.
Labels: Isreal travel