Circle of Fire (and water) 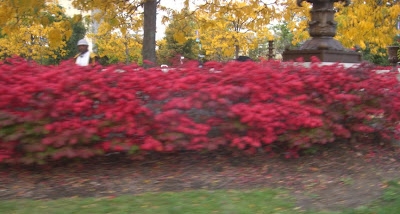 Photo taken while driving, pardon my lack of composition & focus.

Buffalo is graced with a series of traffic circles designed by none other the grandaddy of landscape design, Frederic Law Olmsted. We are doubly blessed with the Buffalo Olmsted Parks Conservancy, the caretaker of our Olmsted parks (six), parkways (eight) and circles (nine), one of his largest bodies of work (designed from 1868-1896). 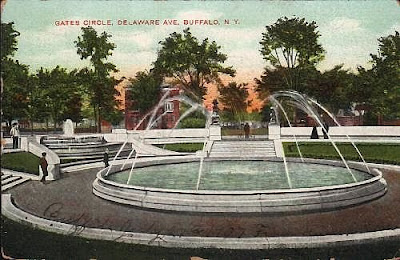 Olmsted designed the circles and parkways so that within steps of each resident’s door you would enter a world of "sylvan beauty" on your way to a magnificent park. His words, not mine. I'm not sure what sylvan beauty is, but apparently, I've seen it.

The circle at the end of my street, Gates Circle, was originally just called "Chapin Place." It's named, appropriately I think, after Buffalo's first water commissioner. The circle was sited here because, supposedly, there is a natural geyser at this location originally called Jubilee Springs. The circle is the gateway to Buffalo's "Millionaires Row," Delaware Avenue–home to many large estates and mansions–and downtown Buffalo. 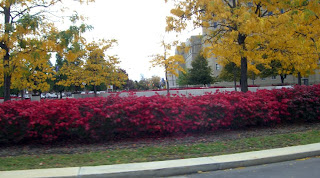 The circle is well planted for seasonal interest. The interest this season? Screamin' red burning bushes. In spring, the bushes are a great green backdrop for the screamin' red tulips that circle the circle. Hundreds of 'em. I'll have to get a shot next spring to share. I have no idea if these are the plantings Mr. Olmsted originally had planned for this circle, but it does look impressive. 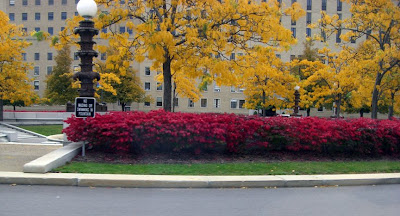 Right now though? They're bright red and a traffic stopper (not really STOPPING traffic, although, it being a circle, the cars at least have to slow down). Even the yellow foliage of the trees helps to make the red scream more. I love traffic circles.

Having driven in almost every major country in Europe (and nearly 30 years in Buffalo), I appreciate their traffic-calming nature, time-saving ability, the conservation of fuel (NOT having to wait for traffic lights). Nothing annoys me more than to have to wait for a traffic light, late at night, when there are no other cars around, what a waste of time and gas. I also love a traffic circle's opportunity for aesthetic-pleasing creativity–lamps, fountains, plantings, trees and sculpture. 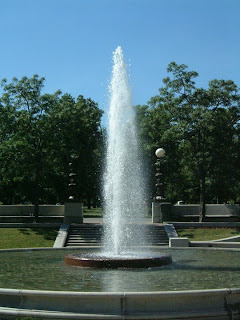 Having ridden a bike through the Place de la Concorde in Paris, during rush hour, on a Friday, I feel for bikers and pedestrians in traffic circles. They are NOT pedestrian-friendly. Fortunately, every 174th driver is friendly though. My biggest beef is people do not know how to drive in a roundabout / traffic circle / rotary. You have to yield to the traffic already in the circle. It's as simple as that. Well, unless you're driving in England–on the opposite side of the road, on the opposite side of the car – THEN traffic circles are panic-inducing. 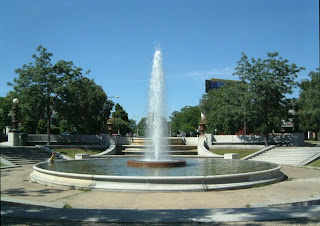 Gates Circle is a major thoroughfare for our northern suburbs. We all benefit from the planning and care of this and our other circles.

We often walk to the circle and, risking life & limb, cross the street into the circle center - with stone benches, Beaux Art stone urns, pools and an awesome fountain. Cooling off in the fountain (by kids) was cracked down on a few years back, it's not designed or intended for playing around in. And with occasional bits of "refuse" floating in it, not particularly appetizing. 'Cept if you're a dog.

It's a nice place for patients, visitors and staff from the hospital across the street to sit a spell, relax, eat lunch, contemplate life, or yell on their cell phones and have a cigarette. I wonder how many people trying to walk cross the intersection ended up in the hospital. 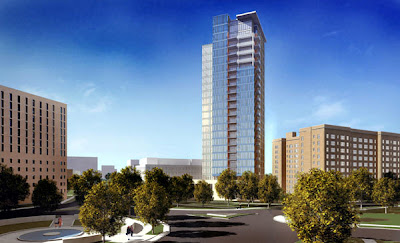 There is a 10-story hospital (left in this architectural rendering) on the circle (lower left), slated to move in two years, as well as an upscale apartment building (right), a few big homes and businesses– and a 23-story glass residential tower of million-dollar condos (center) is to be built on one lot across from the circle, this is all at the end of my street. The neighborhood is generally excited about it, as long as some traffic and parking lot entrance concerns are met. 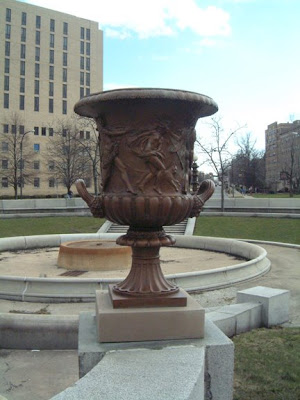 Eventually I will get around to posting about each of our traffic circles - each are vastly different - some have statues, some have mature tees, some have monuments and others have light standards. All are creatively planted and well cared for.