Indoor-Outdoor: Carpeting the house with plants 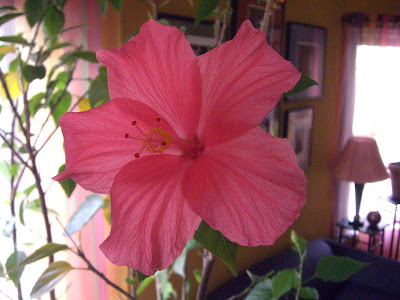 The last three weeks has been the slow labor of dragging the potted plants indoors–scratching floors, dropping leaves and leaving trails of disgusting, plant-tray water.

I don't have tons of plants that summer outdoors, but what I have are good-sized suckers. Above is the hibiscus–a donation from a friend. The photo is deceitful–this is the only flower on the entire 8' tall plant that has about 1/16th of its leaves. And the ones that are there, are yellow. The above also photo satisfies my obligatory November Garden Bloggers Bloom Day post. 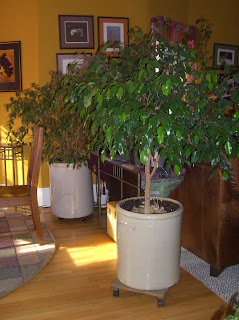 To the left are the two ficus. They're both planted in large crocks picked up at estate sales. The tree in the foreground is the son of the one in the background. I planted a branch of the store-bought father with some rooting powder a few years ago and had more of an opportunity to encourage it to have a single trunk. Plant coasters are the only way to handle these bad boys. Father plant has seen better days. I need to do some extreme pruning and get him outside next summer. He stayed indoors this year. The comparison between father & son is shocking. You'd think he was adopted. 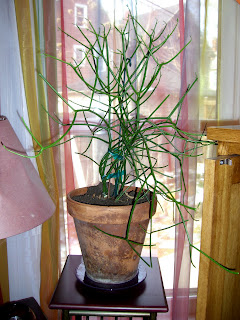 The next two are two neighbor plants, both huddled near one of the few windows that gets filtered light. The pencil plant was a cutting from a friend last year. It LOVED being outdoors and seems happy here. 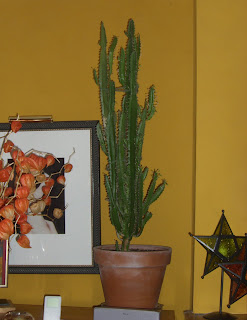 The cactus was a going away gift from a photographer from the early '90s. He was staying, I was moving. My job had me take a position in Rochester, NY against my will, better judgment, and wife. Turned out to be short-lived–but the cactus lived on! It doesn't get lots of light but has been in this spot for seven years and doesn't complain. He stays inside during the summer, though next year I think he could use a summer away. The orange blob next to it are the Chinese lanterns brought indoors and dried from last years' garden. 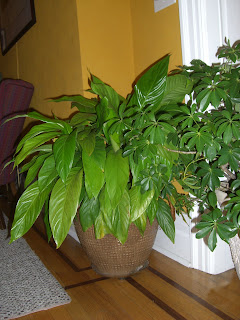 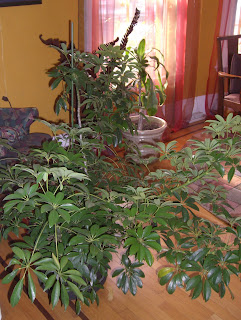 Some of these plants I've had so long I don't remember where they came from. Maybe in my zeal, I brought in a few of my neighbor's plants over the years. Many have gotten too big for their pots and if they have they get bigger pots–or divided. So now I have two of most plants. This winter at some point I'll be dividing again. Then I'll have four of each, then, next year eight. When does it all end? 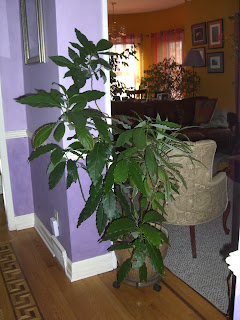 To the left is a pot that had some tropical-looking, store-bought plant in it. For a winter I kept throwing avocado pits in the dirt–straight from the avocado–no toothpicks in water for us. As you can see, the avocados (guacamole trees) are very healthy and happy and do much of their growth in the summer outdoors, overtaking the plant that was in the pot originally. 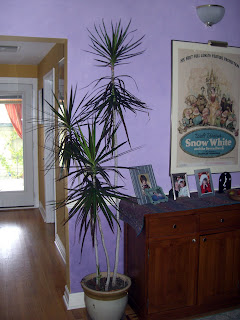 Hey–did you ever burn dried avocado leaves? I had some dead brown leaves on the floor last year and threw them in the fire place. My wife came downstairs asking what the hell I was doing. The house had filled with the very strong and very distinct smell of pot. I can't imagine what the neighborhood thought as the smell went up the chimney and outside for all to enjoy. Good times. Good times. 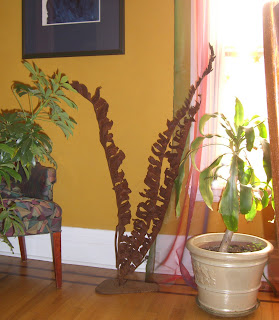 Does the fern sculpture to the left count? It was created by local artist Paul Gallo. I've had it for about seven years. I take that outdoors in the summer too. It is wonderfully rusty and will catch any fabric that comes within three inches of it. Outdoors it looks great mixed in with the live plants. 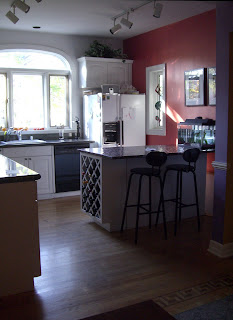 I do have one fake plant. My father-in-law hates the look of kitchen upper cabinets that do not go to the ceiling. It's sort of a joke, but for Christmas a few years back, he gave me the basket of plastic greenery. You can see it to the right, on the cupboard above the refrigerator. I've got to admit, it fills a hole.

I don't keep any plants on my second floor. I tried, but found I am extremely unreliable and irresponsible when it comes to watering–especially those farthest from a water source. Fortunately, I am acutely aware of my inadequacies. 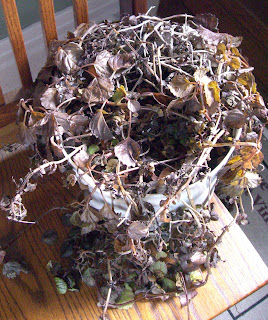 This post was inspired by Elizabeth's post on Garden Rant, Behind Closed Doors. She's got a plant room in her house (hope it's near a source of water). And she's got an office of plants with a plant maintenance company on retainer. I don't have either of those luxuries. So I pick up dead leaves every day in every room.

Did you get all your plants in before the first frost? I lost one Swedish ivy this year (above). Laziness on my part.
Labels: House Houseplants My garden