An outdoor watercolorist gets his $30 million dollar due 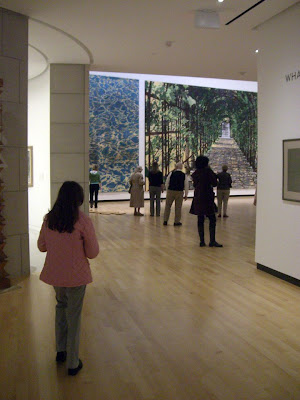 That would be artist Charles Burchfield (1893-1967). Originally from Ashtabula, OH, and a graduate of the Cleveland Institute of Art, Burchfield moved to Buffalo in 1921 to illustrate wall paper designs. All the while creating watercolor paintings described: "In them, flowers had faces, trees gesticulated and corn stalks danced."

This weekend, the $30 million dollar Burchfield Penney Art Center (no hyphen now!) opened. It's the first new museum building in Buffalo in 100 years. And boy, is it spectacular. I was there, along with more than 3,000 others on Friday night for its grand opening. I have to say, it gave me chills walking into some of the gallery spaces. Especially the images to the right, and below, as you enter the grand main gallery space. This garden arbor work is one of the many colossal pieces in their collection they've never previously been able to display. 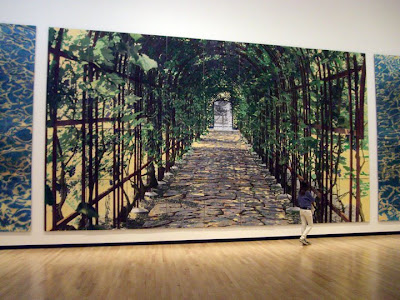 The Art Center is dedicated to the art and vision of Burchfield and distinguished artists of Buffalo-Niagara and Western New York State.

The Charles Burchfield Center at Buffalo State College (my Alma mater) opened in 1966 in the already cramped quarters on the third floor of a campus building that was never intended to be an art museum. The photo above shows the new facade with their old location in the background–a Buffalo State College building designed to look like Philadelphia's Independence Hall.Between 1991 and 1994, philanthropist Charles Rand Penney donated more than 1,300 works of art by Western New York artists, including 183 Burchfield paintings, prompting the name change to the Burchfield-Penney Art Center. 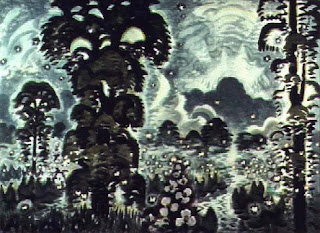 Right: One of its most important Burchfield paintings, Fireflies and Lightning, previously owned by Julie Andrews and Blake Edwards was acquired at great cost ($300,000) and dramatically, at Sotheby's in 1998.
The Burchfield Penney is the first art museum in New York state to be certified by the U.S. Green Building Council's Leadership in Energy and Environmental Design (LEED) program. Slated for silver certification, the museum is designed to meet rigorous standards in the areas of site sustainability, water use and efficiency, reduced use of energy and atmospheric impact, use of materials and resources, improved indoor air quality and innovation and design process. In addition to LEED recognition, the museum will be a participant in the New York EnergySmart New Construction Program, meeting state standards to reduce energy usage and consumption. 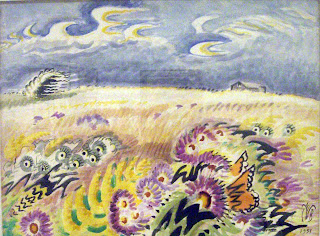 Click here to see a live view of the new museum. It had a 31-hour straight opening this past weekend.

Directly across the street is the Albright-Knox Art Gallery, which has the one of the greatest collections of international contemporary art in the U.S. Its collection contains not only works by artists such as Matisse, Picasso, Van Gogh, Gauguin and their ilk, but many works are signature pieces from these artists. And that's just the old guys. The collection also exhibits and collects work by up-to-the-minute current modern artists. Only the Museum of Modern Art in NYC has a better collection of contemporary art. 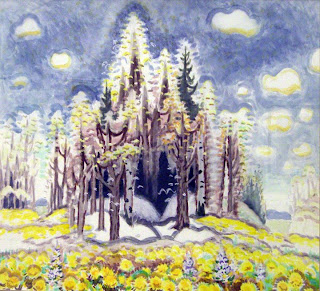 Right: Charles E. Burchfield, Early Spring, 1966-1967. Watercolor, charcoal and white chalk on joined paper mounted on board, 42 x 37-1/8 inches. Collection of the Burchfield Penney Art Center, The Charles Rand Penney Collection of Works by Charles E. Burchfield at the Burchfield Penney Art Center, Buffalo State College, 1994
And not to be outdone, within shouting distance is the Buffalo & Erie County Historical Society. The only building left from the Pan American Exposition of 1901 (the rest of the buildings were not permanent structures). If you know your history, you know that this is where President McKinley was shot. (McKinley later died just up the street and around the corner from my house.) The gun that was used to shoot McKinley is in the museum's collection along with many other significant artifacts from U.S. and local history. (Even pieces of Grover Cleveland's wedding cake). In front of the historical museum is Delaware Park's Japanese garden. A 1974 gift from our sister city of Kanazawa, Japan. We had our wedding photos taken there. 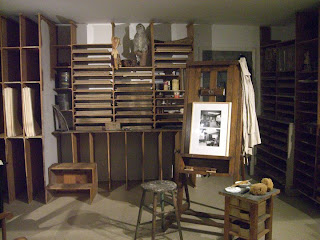 Left: Burchfield's art studio, from his home, recreated in a permanent space in the new museum.

Back to the Burchfield though. Designed by NYC architectural firm Gwathmey Siegel, (also designers of the NYC Guggenheim addition) the building is all about the art. There are immense galleries and intimate spaces. (The largest gallery has lights embedded in the ceiling configured to mimic the constellations of Orion and Taurus, which Burchfield often referenced.) There's a gallery just for media arts that includes unimaginably (right now) infinite options for multi-media artists, including an adjustable-height ceiling. There is a "Useum" for young kids, a circular gallery space designed for the exhibition of Burchfield's seasons paintings (as he intended them to be viewed), a 150-seat state-of-the-art theater, large common areas and a conference room for meetings & events, second-floor gallery overlooks offering other perspectives of large-format works, offices for staff, space for Buffalo State College's nationally-renowned art conservancy program and the obligatory gift shop and gallery cafe. And I'm sure I'm leaving even more out. 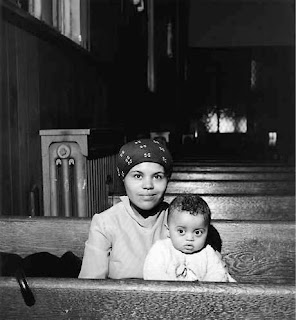 Well-represent in the Burchfield Penny collection is internationally-renowned social documentary photographer Milton Rogovin (b.1909 - he turns 99 next month!). The collection includes about 150 photographs with selections from all of Rogovin's major series, including the Triptychs series, in which he photographed the same subjects over a 30-year span. To the right is a Rogovin print from one of his triptychs. This print belongs to me and hangs in my house, before that, it hung in the Getty Museum's first photography exhibit after it was opened. Milton gave it to me.
This is just what they have on site. They also have exhibitions in many local corporate headquarters and the Roswell Park Cancer Institute. Also, in their old building, the 1882 dining room and library of the McKim Meade & White-designed Metcalfe house (demolished in 1980) is reconstructed so you can walk around in them. The staircase from this house has been on display for more than 20 years in the Metropolitan Museum of Art in New York. 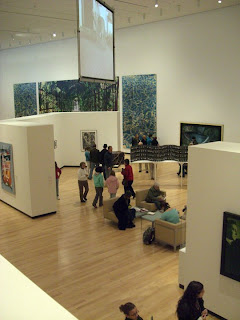 GARDEN BLOG READERS SIDE NOTE: Elizabeth's (of Garden Rant and Gardening While Intoxicated) husband, Alan, was part of the 31-hour grand opening with a performance of his work, Digital Fiction, a collection of stories created expressly for viewing on the web, using text, images, audio and video where users can interact and sometimes participate.

Elizabeth has posted about the new museum and Charles Burchfield here. She's a past curator, critical art essayist, art reviewer and the editor of a widely-read local arts & leisure magazine. Her post has fewer grammatical errors and better use of punctuation.

Burchfield was a chronicler of the outdoors–primarily painting landscapes of forests & fields around his home. The woods where he formerly lived are now the Charles E. Burchfield Nature and Art Center with 29 acres of nature trails and woods, wild and cultivated gardens and sculpture, situated on the banks of Buffalo Creek. One garden is designed using plants Burchfield often painted. They host adult and children’s art classes, art exhibitions, free summer concerts and special events. I would venture to guess no other watercolor artist has left such a legacy.

In short, this is the kind of museum every city would wish to have. And across the street is an art gallery any nation would wish to have. Add to all this our collection of some of the best examples of American architecture in the country and our Frederic Law Olmsted-designed parks and parkways. These are all in the area of Garden Walk Buffalo. You can see these as you tour our more than 300 gardens, each a personal work of art in themselves, much like your garden is.

So now, when I invite you all to come to Buffalo for Garden Walk Buffalo this year (July 26 and 27, 2009, mark it down!), you'll have so busy a weekend you'll need to come back again and again.