This is a favorite old post, created before I was on Blogger. I repeat it here to save & catalog it on this new site. Sorry if you've read it before.

DaVinci brought with him a little bit of Tuscany when he moved to Clos-Lucé Manor House, Amboise, France, at the end of his life and created this garden, a couple hours southwest of Paris, in the Loire Valley. The Mona Lisa hung in this house for a while. It seemed so anachronistic to think DaVinci lived here. I always picture him in Italy doing renaissance-y things for the wealthy–not in France, in a medieval manor house in the country. Of course, the house is now a museum filled with to-scale reproductions of some of his inventions, crated by IBM. Completed with requisite café and gift shop, natch. 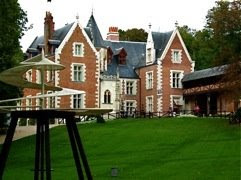 Leonardo said, “A well filled day gives a good sleep. A well filled life gives a peaceful death.” After only three years here, he died in 1519 and is buried in the Chapelle St. Hubert on the manor grounds

After having read the books on secret messages hidden in Da Vinci’s artworks, I wonder if there’s a secret message designed into this garden for us to decipher.

FAVORITE THING: Knowing I was in rooms where one of the world’s greatest artists, a genius visionary, lived. He died in the bedroom, which is part of the self-guided tour. It gave me chills.

Beyond the manor house is a very pleasant trail through the woods. Along the trail are exhibits relating to the woods and Da Vinci’s works and experiments. His famous square-ish parachute hangs from a tree. His military tank was created full size and is a blast to play in. There are audio stations, as well as interpretive signs at each of the 12 interactive sites in the woods.

If you'd like to see other photos of the house & woods, please visit here.