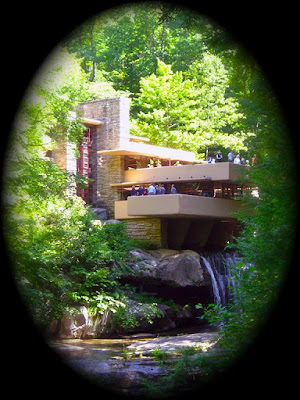 Last weekend we went on the trip of a lifetime. Okay, my lifetime. I am a huge Frank Lloyd Wright fan. Somehow that has rubbed off on my daughter (11). She wants to be an architect (she's got four female architectural mentors in our circle of friends). For her birthday trip (we don't give gifts for birthdays, we make memories by going on trips together) she wanted to go to Wright's Fallingwater, in Bear Run, PA (a five-plus hour drive from Buffalo). This brought tears of joy to a father's eyes. 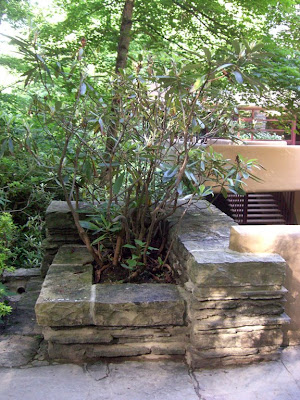 I will spare you my impressions of the 1937 house, and how Wright redefined how one can live in a house, and how a structure can be one with its environment, how to incorporate innovation while at the same time utilizing centuries-old craftsmanship. I won't even belabor the point that this building, as with most Wright buildings, still looks futuristic–after almost 100 years! It's been said Wright is the only American-born person considered a genius. But now I'm gushing. Maybe I'm not sparing you much.

Skipping you all the design commenting I could blather on about, I will concentrate on how, at Fallingwater, he incorporated the setting into the house and the house into the setting, with plants. The house was built for Edgar Kaufman, of Pittsburgh's Kaufman's Department Stores (now Macys). 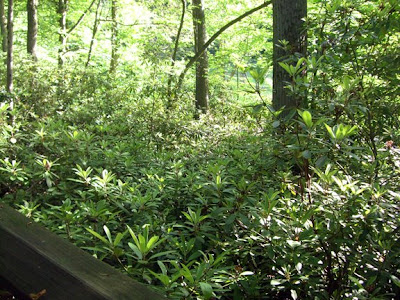 Rhododendrons are everywhere. They are native here and there are hundreds and hundreds around the property.

First off, as you walk from the visitor's center to the house, you are struck by the seemingly thousands of native rhododendrons. They literally surround the path and property. If I do get there again, I have to make sure it's when the rhododendrons are in bloom. You also notice the structure of the stone in the woods–the horizontal, blocky, masses of layered stone cantilever over each other, in a cubist fashion, along the path to the house. By the time you get the first glimpse of the house, you can see where he stole the "vernacular" for the building–from the creek bed itself. The cantilevered terraces jut into the trees, maximize its setting and multiply the living space of the home. 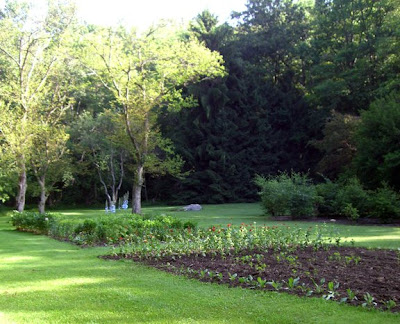 The cutting garden on the walk to the house.


On the way to the house, you pass the cutting garden. Every room of the house has flowers. Every room. Having an organic, natural element in each room was mandatory in a Wright house. That being so, he ensured it in most rooms by creating built-in planters inside and even on the exterior of the house. 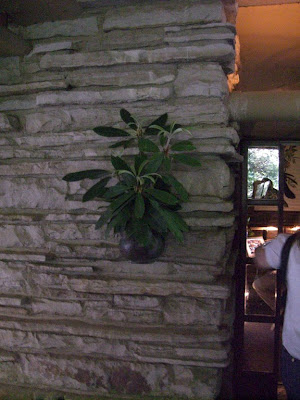 Before you even walk in, plants/planters greet you at the doorway. The stone was quarried on-site.

Rather than fancy artglass, as can be found in other Wright homes, nothing obscures the view of the outdoors from the inside. Even the corners of the rooms are glass butting glass. With most rooms cantilevered, outside walls are not weight-bearing. Wright took advantage by having the corners of rooms disappear. From any room, with windows open, you hear the waterfall below. A boat-like stairwell, covered with glass doors takes you right down to the creek for a swim from the living room.

Originally, the Kaufmans wanted the house sited across from the falls to take advantage of the view. Wright suggested the house be part of the waterfall. It made the cover of Time magazine in January, 1938. And history was made. Fallingwater is a piece of art that can be walked through. 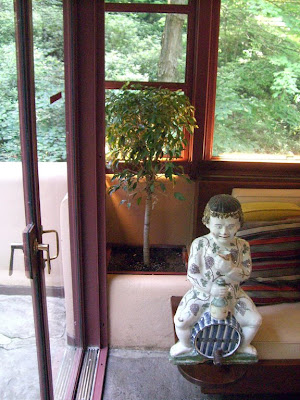 A built-in planter in the living room, on either end of the built-in sofa. 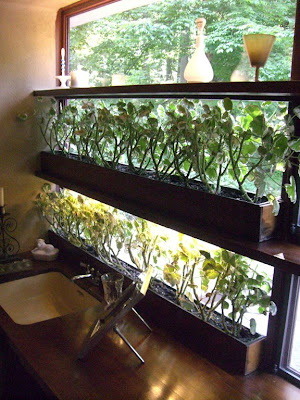 The inside view, looking outward from Mrs. Kaufman's bathroom. 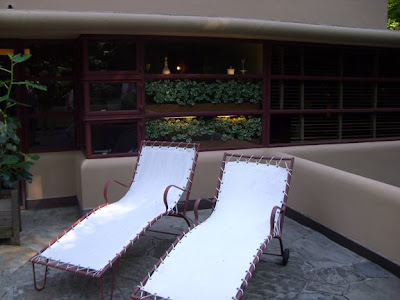 Mrs. Kaufman's terrace looking toward her bathroom window with the plants. No need for blinds or screen or draperies here. 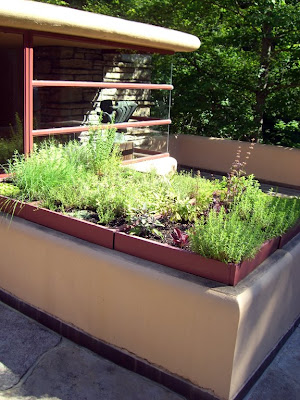 Their son's room terrace hosts an herb garden. This is the upper-most terrace on the third floor. 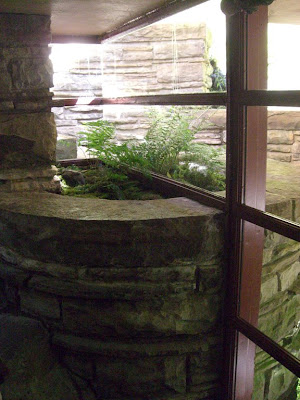 The "back door" which leads to the guest house gets this semi-circle indoor/outdoor built in planter with a moss garden. 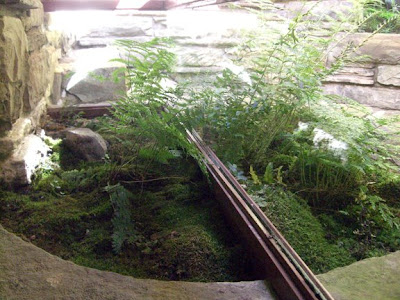 The window pane actually cuts the planter in two. 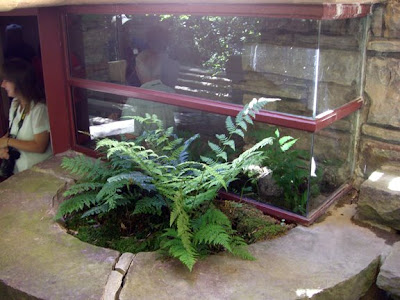 The moss garden planter from outside. 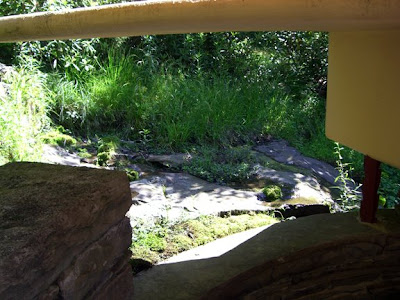 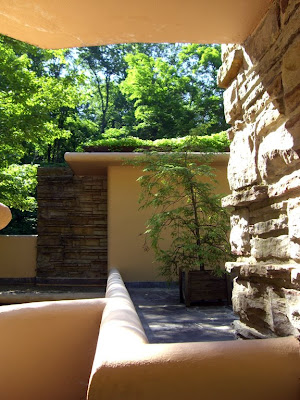 On a little-used terrace, a small tree peeks around the corner. Above it is a roof-line built-in planter with trailing vines. 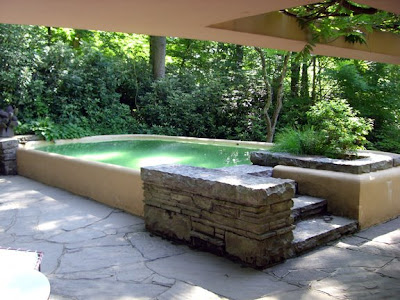 The spring-fed guest house pool, in the woods, surrounded by rhododendrons. Wisteria arbor above. 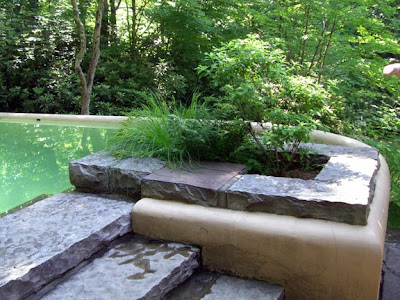 Even the pool has a built-in planter. 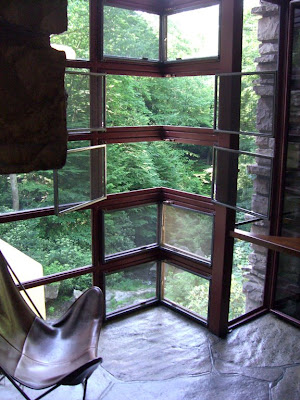 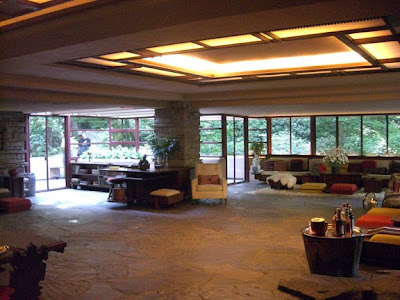 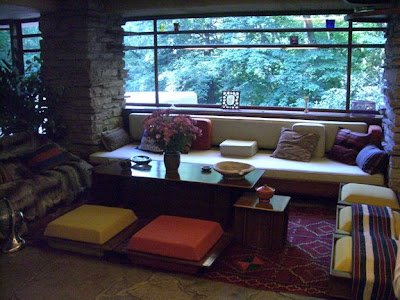 Gratuitous shot of one of the sitting areas of the living room. Gratuitous shot of the fireplace and the existing boulder that was incorporated into the floor. 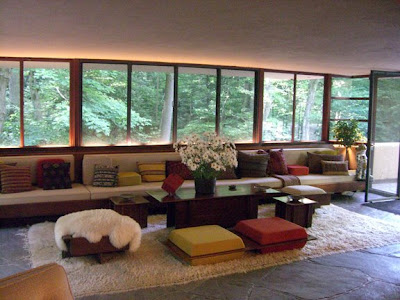 Gratuitous shot of another sitting are of the living room. All furniture, textiles and art are original to the Kaufmans from when they lived there. 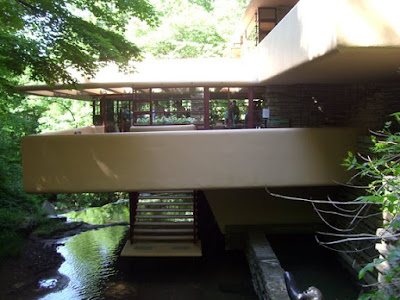 Gratuitous shot of the stairwell from the living room to the creek. 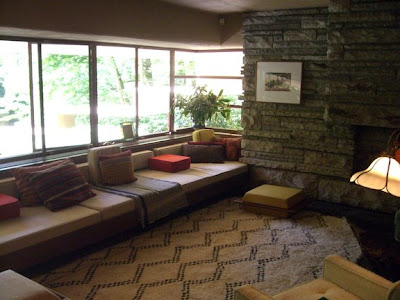