Traffic Circle #2–Another Round

Buffalo is blessed with an urban landscape designed by none other than Frederic Law Olmsted, inspired in large part by the parkland, boulevards, and squares of Paris. Our system of parks, parkways and traffic circles make up one of his largest bodies of work (completed around 1896). 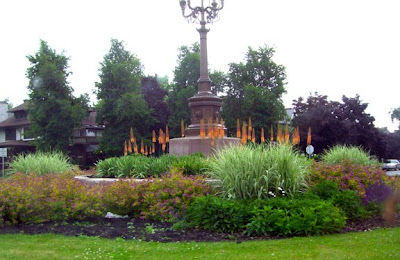 From any direction, this circle makes for a pleasing substitute for the former asphalt runway this intersection was when I came to Buffalo in 1980.
One of the most compelling aspects of the parkways are the traffic circles incorporated into many of our neighborhoods. Last post on a traffic circle I did was Gates Circle, the traffic circle at the end of my street. This time, I chose Ferry Circle at the intersection of Richmond Avenue & West Ferry Street, 'cause it looks particularly nice this time of year. 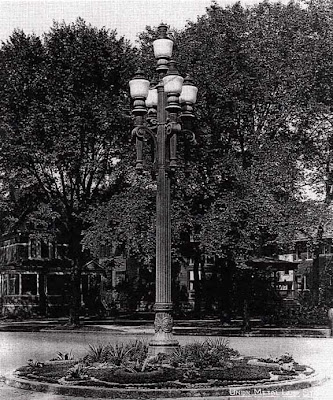 The original circle was much smaller. The circa 1909 light standard, probably gas fed, was taken away in the 1930s. The 6,500 lb. reproduction, a twin to the light standard in Symphony Circle, the traffic circle just up the street, was installed in 2002.

The original circle on this site was built around 1870 (accommodating horse & carriage traffic) In 1920, it looked like the photo to the left. In the 1930s it was completely paved over. In 1980, when I came to Buffalo, it was just a huge intersection with insufferable red lights and a congestion-causer. There was nothing in the center of the intersection–just a huge expanse of asphalt pedestrians feared to cross. My old house was not too far from this circle and I drove around it nearly every day. The new circle is a vast aesthetic improvement over the past intersection.

In 2002, ground was broke to remake a circle, including an exact replica of the light standard that was originally there. Partners in this resurrection were the City of Buffalo, Erie County, Olmsted Parks Conservancy, Richmond Neighborhood Association, the Symphony Circle Steering Committee, Kleinhans Community Association, Colgate Industries, and the Rupp Foundation.
Olmsted's idea of the circles and parkways was to serve as a means for a visitor to travel from one park to another (Delaware, Cazenovia, Front, South Park, Riverside, and Martin Luther King, Jr. parks) without leaving the park setting, as well as extending the parks into the city.

Wish a plant list existed for the circle. Others could benefit from its design.


The circle's gardens had the soil replaced, compost, organic fertilizers and mulch were added. Grass areas were aerated and mowed at a higher level than would normally be done. A drip irrigation system was installed. Herbaceous and woody perennials were planted to improve soil and reduce water runoff.

One thing sadly lacking on the otherwise insightful Olmsted Conservancy website is a complete plant list of what is planted in the circle.

I know many hate circles because they can be tough to navigate if you're unfamiliar with the rules (PEOPLE IN THE CIRCLE HAVE THE RIGHT OF WAY!!!). But I love them for their traffic-calming (you have to slow down as you approach), and the lack of traffic lights (traffic flows better).