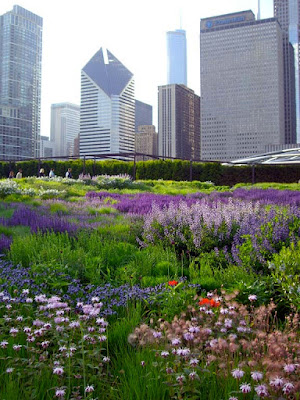 One of my favorite photos. The Lurie Garden. I love the contrast of Piet Oudolf's prairie-style garden, with swaths of purple salvia, against the skyscrapers. 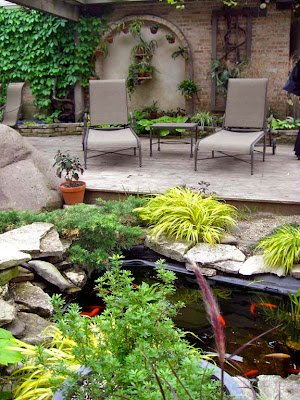 My favorite garden of the weekend. Rick Bayless' urban garden–used for socializing and as a production garden for (mostly) greens for his restaurants. My garden has more in common with this one than others we visited. Lots of creative and strategic gardening ideas going on here. Some of this garden will DEFINITELY end up in mine.
Day two: bus ride to restaurateur, and Chicago media personality, Rick Bayless' garden; group Mediterranean lunch (delish); visit to blogger Carlyn Gail's garden; visit to Ginkgo Organic Gardens, a community garden owned by the non-profit Neighborspace; then off to Lincoln Park Conservancy/Caldwell Lily Pool Garden/Lincoln Park Zoo; quick trip back to Millennium Park to photograph the "bean" and the video fountain towers; dinner for 50 at a nearby restaurant; ad hoc blog blather till 11 p.m.

Day three: It was all I could do to drag myself out of bed for breakfast and walking along the waterfront by Millennium Park before heading back to the airport. I slept on the plane. I never sleep on planes.

Bought my daughter a gift of a package of Mentos in the airport (I'm cheap). Read a blurb in Esquire about inserting a Mentos into an almost-frozen ice cube and, once frozen, offered in a glass of Diet Coke to an unsuspecting friend. Then wait ten minutes. So, (Sandy), if you come to the house, and she's REALLY intent on offering you a cold, refreshing, glass of Diet Coke, play along, but drink it outside. 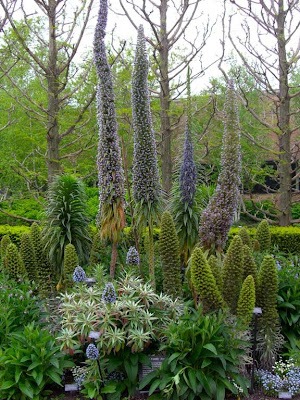 Looking more like a Dr. Suess garden, this area of the Chicago Botanic Garden featured plants of the same family (this case, Borages) planted together, It was a great way to show how plants in the same family are similar and how they differ.

The Chicago bloggers that organized the weekend did a smash-up, bang-up job. Everything went off without a hitch. No one got lost. No one went hungry. No one was poisoned by wicked plants. Everyone had a good time.

I'll get to posting more about the individual gardens we saw. There's a dearth of posts right now by Fling attendees–they're almost invasive. I really can't add too much more to their excellent posts, but I will post on the gardens we visited and see what ideas I'll be stealing from Chicago gardens.

And the 50-odd bloggers? Well, they're not so odd. It was a pleasure to meet the people behind the words & photos I've been reading for the last two years. Some looked like I thought they would. Some were completely different. It's hard to tell from the pinky-fingernail-sized photos that accompany most blogs. They're all friends now. I'd even serve them Diet Coke.

Elizabeth and I are already looking forward to hosting everyone here in Buffalo next year. Buffalo Fling '10? Flinging Buffalo '10? BuffaFling '10? BufFling '10? 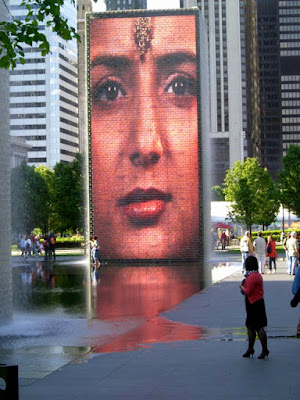 Millennium Park's Crown Fountain by Spanish artist Jaume Plensa. Awesome. Coolest piece of public art I've ever laid eyes on. The fountain consists of two, 50-foot (about four stories), glass-block towers, with water pouring off the tops of all sides, at each end of a shallow reflecting pool (we're talking less than two inches here). The towers project video images from a broad social spectrum of 1,000 Chicago citizens projected on LED screens and having water flow through a water outlet in the screen to give the illusion of water spouting from their mouths. The faces are mostly still, but every once in a while they'll blink or smile. It's hard not to be dazzled. And not to be impressed in how interactive this art piece is. Kids all over the place cooling off. Adults smiling all over the place. Hard not to appreciate how art interacts with life with this work of art. I want one for my yard. Maybe not so big. 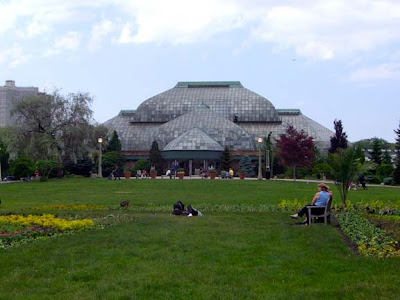 Lincoln Park Conservatory. That's Layanee from Ledge and Gardens on the bench watching kids make out on blankets, or something. 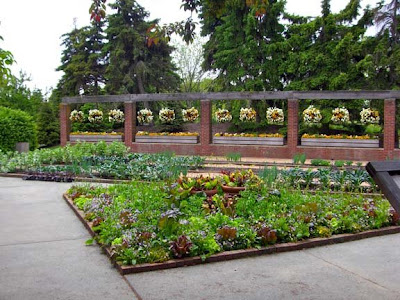 The vegetable garden area at the Chicago Botanic Garden. Not a uni-planted, dirt-path-surrounded, mounded row anywhere here. A lettuce garden really looks like salad. What vegetable gardens could be like. 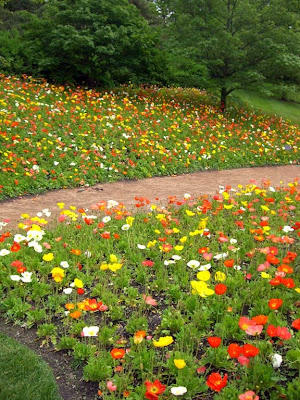 Chicago Botanic Garden again. You cannot walk by these poppies without taking a picture. Poppies were once used as emblems on tombstones to symbolize eternal sleep–sleep from the opium and death from the common blood-red color. Hence Dorothy's long sleep in the poppy fields in "The Wizard of Oz." 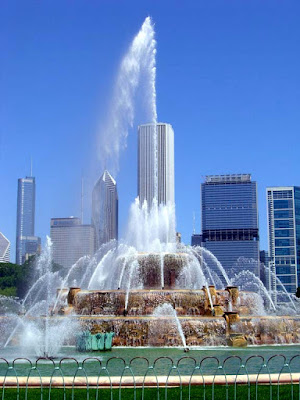 Not part of our tour–Buckingham Fountain in Grant Park on the waterfront. Built to be one of the largest fountains in the world. I assume the 1927 Chicagoans had some sort of complex going on. It's actually controlled by a computer in Atlanta, GA. This is the fountain from the TV show "Married with Children." I couldn't look at it without humming Frank Sinatra's "Love and Marriage." 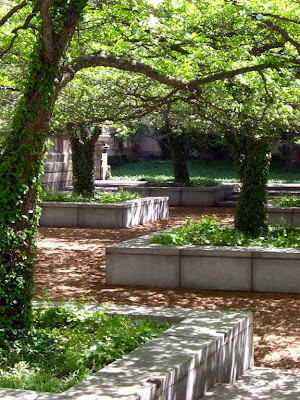 Not part of our tour–but one of my favorite gardens in Chicago now–the gardens of the Art Institute of Chicago. They're literally right next door to the Lurie Garden in Millennium Park. This garden probably feels like the red-headed stepchild because tens of thousands are next door oohing and ahhhing. But it has nothing of which to be ashamed. Here, the texture of tree canopy, vine-covered trunks, gravel, green ground covers and shadows made this garden look like an impressionist painting.
Labels: Botanical Garden Chicago Garden Tour travel vegetable garden visit