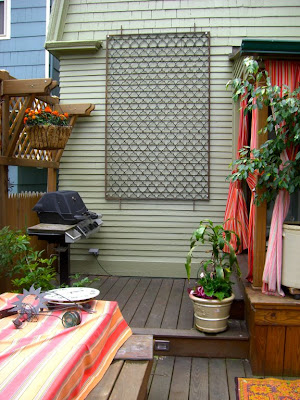 A friend called me up and said her neighbor had a great big old rusty grate out by the curb for heavy trash pickup. She couldn't use it and wanted to know if I could. I think I was there before she hung up the phone. 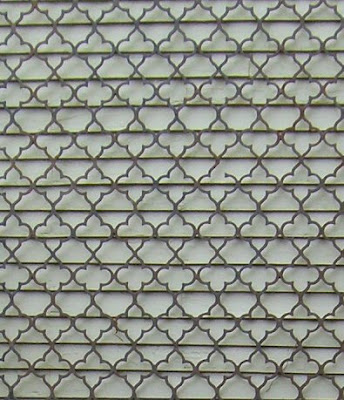 The grate has a sort of Turkish-inspired design to it, along with a patina of age (by which I mean it's got some rust and pieces missing).

I took the grate, not 100% sure what I'd do with it, only knowing that I'd use it somewhere. I also think that since the outside of the house acts as "walls" for my outdoor space, it's prime area to treated like in interior wall–with artwork.

So I hung it on the house. I have plans to build my version of an "outdoor kitchen" here, around my grill. It's being worked on as we speak, so to speak. It's going to be less of an outdoor kitchen and more counter space around the grill, as a typical grill (and by typical grill, I mean affordable grill) lacks any adequate flat surface area. There's barely enough room for a plate, barbecue sauce, and a couple utensils. Where is one to rest their gin & tonic?

I'll put a planter beneath it and plant something (next year!). I'll plant some things I'd want near the grill (basil, rosemary, a barbecued ribs tree), but want something to crawl up the grate. Maybe morning glories? Passion Flowers? What would you suggest? It's got to be an annual (in zone 6) as the planter probably won't be deep enough to overwinter anything.
Labels: back yard House My garden