Signs of the times – And it's Garden Walk time! 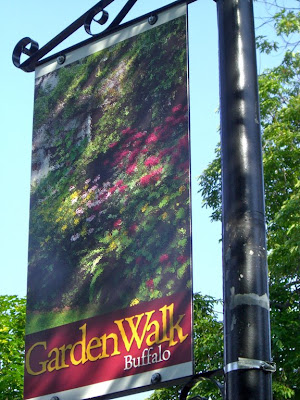 This is cool. One of the streets in Buffalo that has benefited greatly from the enthusiasm, encouragement, PR and traffic of Garden Walk Buffalo, is unquestionably Sixteenth Street, in the Cottage District. 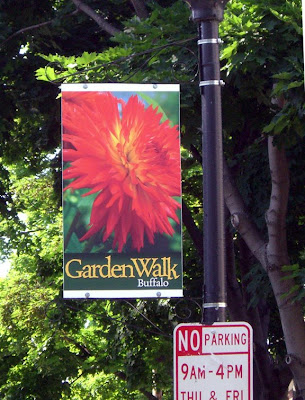 To celebrate the fact, and to brighten up the street even more, they have installed these banners of past Garden Walk poster artworks. If you're in Buffalo, and you like these banners, let me know and I can connect you to the Sixteenth Street folks. They can fill you in on where you can get these banners for your street too. They (and Garden Walk) would love to see these repeated on other streets throughout the city.

This was their idea, their block club money, their coordination to get them produced, and their work to install them. They contacted each of the artists that created the artwork first, to get their permission & blessing. Then I created the files to send off to their printer. I designed most of the posters on which the artwork was used. This was my donation to the Sixteenth Street efforts. Then, they spent a bit of time on a weekend on ladders adding the curly-cue supports & hanging the banners. 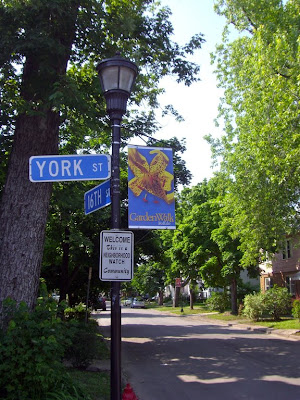 Sixteenth Street, as little as ten years ago, was what you might call a "transitional" street. Transitioning to what, I don't think anyone knew. An area of the city originally populated by Buffalo's Italian community, it had seen better days. Older housing stock in need of repair; absentee landlords; aging owners that were unable, or lacked the initiative to take care of their front yards; nefarious renters; and shady-goings-on happening at the end of the street and on neighboring blocks. I feel safe in saying this, as I owned a home on Sixteenth Street from 1991-2001.

As with most streets like this, there were bright spots–a few nice neighbors and VERY reasonably-priced homes. We owned a double. After we took out from the mortgage what the tenent contributed, the mortgage was LESS than what we were paying in rent previously. 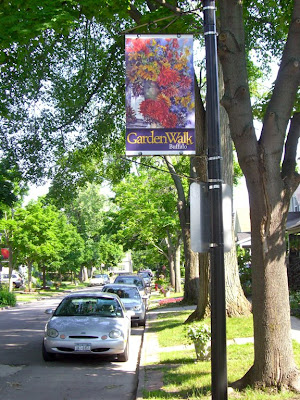 After having gone on Garden Walk, visiting gardens its first few years, I looked at my garden and said, "Hey, my yard is as good as half of these!" and put our Sixteenth Street house on the Walk. Even though literally thousands of people were visiting the Cottage District's Little Summer Street, just a half block away, our house, the only house on on Sixteenth Street on the Walk, wouldn't even get two dozen visitors. The street had that kind of "reputation."

After we had our daughter, we sold the house to moved, ostensibly, to a better school district. We made the couple that bought our Sixteenth Street house promise to be on the Garden Walk. They were not previously gardeners (and still claim not to be). But they not only have been on the Walk, they encouraged neighbors to get involved, and helped start a block club. Each year they, along with the block club (and a particularly generous avid gardener on the block) help to "redo" one front yard garden for an elderly neighbor. They've applied for (and gotten) multiple Garden Walk Beatification Grants–installing street side planters, hanging baskets and these banners. Two Sixteenth Street representatives are on the Garden Walk committee. 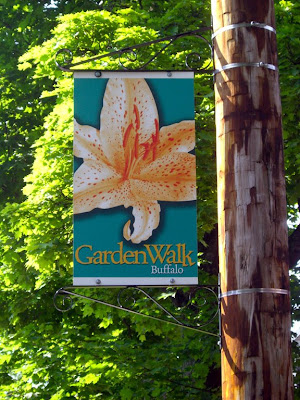 This is a completely different block than when I lived there. Housing values have gone up. People are working on the houses–interiors and exteriors. People are spending more time on their porches (they used to just drag the living room furniture out to them to watch a bills game). Everyone knows everyone else and looks out for each other. I was visiting there over the weekend and every one greets each other with a smile and wave. This did not happen ten years ago. There are 11 house on Sixteenth Street on Garden Walk this year!

Is all this because of Garden Walk? No. It's because of the people. These banners are in honor of their pride in Garden Walk and are a punctuation for a revitalized block. And this is spreading. There are now more and more streets "deep" on the West Side of Buffalo that are getting on the Garden Walk bandwagon–caring more for the aesthetics of their neighborhoods and homes, getting involved on Garden Walk, taking advantage of our Beautification Grants and reveling in Garden Walk's own version of "Urban Greenewal." 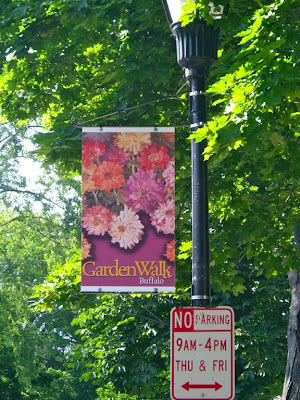 This is what I'm most proud about as president of Garden Walk Buffalo–helping foster neighborhood pride, increasing home values and increasing a sense of community in neighborhoods that might not otherwise have had something to band together for. And then showing it off to a regional (and now national) audience.

And, by my moving off Sixteenth Street, I think I helped make it a much better street.
Labels: Buffalo Cottage District Garden Walk neighborhood