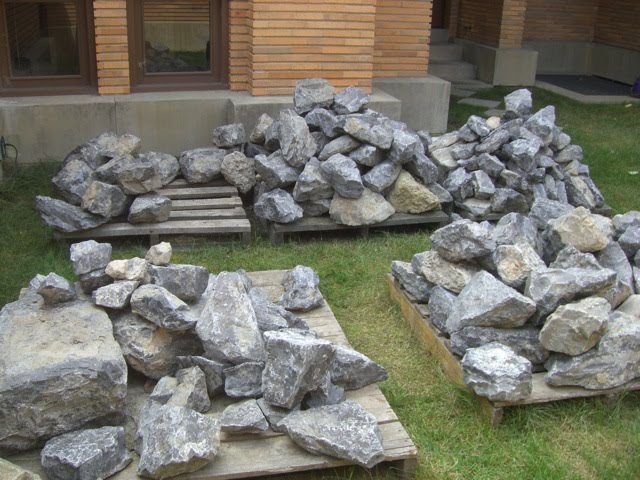 The Darwin Martin House, one of Buffalo's many Frank Lloyd Wright-designed structures, is offering up salvaged stones from buried sections of the old foundation, excavated before portions of the house were reconstructed. If you're local (or willing to pay a LOT for shipping costs) the stones make a great addition to your garden -- and they're only $10 a piece -- or three for $20!
And they come with provenance! Each stone comes with a card that reads:
Original Foundation Stone from the Martin House Complex
This piece of stone was salvaged from buried sections of original foundations for the Martin's pergola and conservatory (1904).

It was recovered during an archaeological dig (2002) of the foundation after the apartment building built on top of it was demolished.
The foundation was composed of mortared, rough pieces of locally-quarried Onondoga limestone. 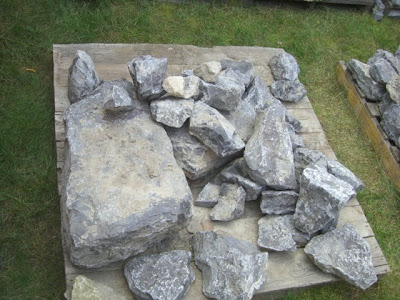 You better hurry though, if you want some. They're actually, genuinely, going fast. I was there today, as were some friends that had been there yesterday and they were down as much as 20% in the last two days. And they only have these pallets left and then there are no more. Bring gloves. Bring someone that likes lifting heavy things. I bought six. Three for my rock garden and three to give as "hostess gifts" when going to parties or dinners. Some of my friends that aren't gardeners, are architects. And some are both, and would appreciate the odd hostess gift of a rock.
The stones can be purchased at The Wisteria Shop, the gift store within the Martin House's rebuilt carriage house. Go to the counter first and pay, then pick your rocks -- they come in a good range of sizes -- from mini-boulder to head-size.  Depending, of course, on the size of your head.
Hours are Mon-Fri 10-4:30; Sat 11-4; Sun 1- 3:30; closed Tuesdays.
Hurry. I've already sent an email about the stones to the Garden Walk gardeners. This week, I'll be sending the email out to the 6,500 on the Garden Walk eNewsletter list.
Labels: back yard Buffalo My garden Wright