Vining your medieval home or business... 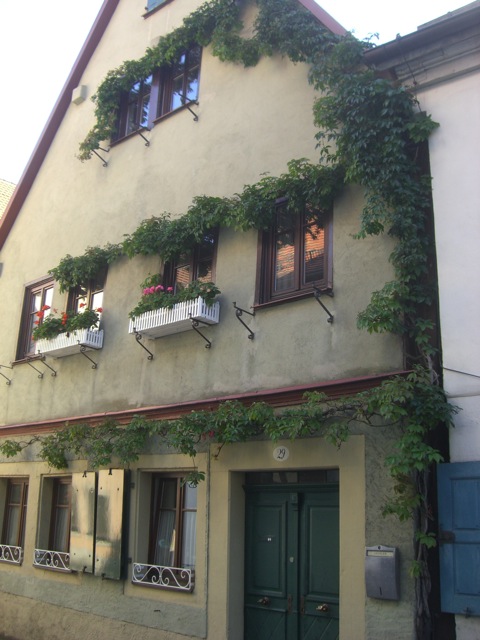 While in Germany a couple weeks back, we spent a night in the charming medieval walled city of Rothenberg ob der Tober. Rothenberg is along the Romantische Straße (Romantic Road), a former trade route during the middle ages, now a tourist-trappy route through Germany.

Starting in Wurzberg, outside of Frankfurt, the Romantische Straße leads you south through medieval walled cities, picturesque villages (and great food) to Fussen, near the Italian border, home to the famous castles of Neuschwanstein and Hohenschwangau. 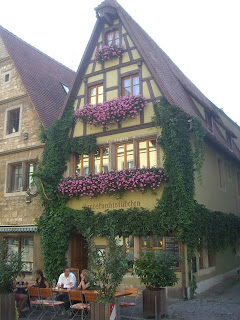 We had visited Rothenberg in the early '90s and had been jonesing to get back there again. Not much has changed. Actually, not much has changed since the 1100s. I was intrigued by the vines over many of the buildings. Conventional wisdom here at home is to NEVER attach vines to your house, you'll be in for a world of (financial) hurt at some point when you need to paint or repair. But we typically don't live in centuries old walled cities. Gated? Yes. But that's different.

In Rothenberg, where your building is stone masonry, on cobblestone streets, it's not so much an issue. It's more of an issue of where to plant and how much space to allot for trunks & root systems. After about ten centuries of doing this, you get good. I was intrigued by what little ground is given to these very healthy plants -- sometimes just the size of a single cobblestone. I can only assume that the root systems are huge & well fed.

The vines we saw were typically wisteria or grape. Most buildings had small, simple structures for them to grow on, either just simple bars or chicken-wire-wrapped frames just inches away from the building itself.

This only gives encouragement to an urban gardener on a small lot, like myself.
Labels: Germany travel