Mike Shadrack is ready to unfurl 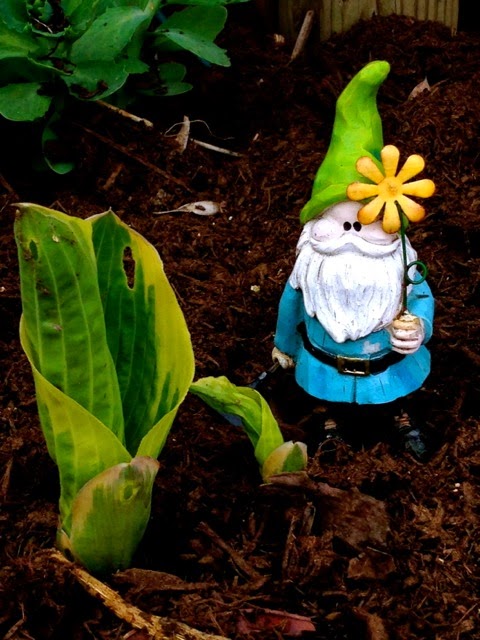 Shown is the hosta 'Mike Shadrack' as it bursts forth from the ground. This hosta is named for Western New York's most notorious hosta aficionado Mike Shadrack, garden author, speaker and first shift, sub-chief assistant gardener at Smug Creek Gardens.

It is described as Medium green with a medium gold margin, extremely cupped and rugose on a vase-shaped clump, scentless, with broadly ovate leaf shapes and a dull leaf texture. Just to be clear that is the description for the hosta, not the man, though they share some qualities.

I don't like gnomes in my garden (Gno Gnomes!!). I'm sort of like the Chelsea Flower Show that way, but I do allow just this one. It was a gift from Mike Shadrack. The man, not the hosta. Not being happy about having a gnome in the garden, but too polite to ditch a gift so easily, I've named him Sbadrack the Gnome.
Labels: back yard My garden