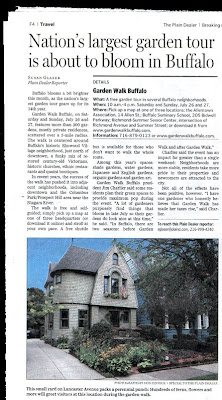 Oh yeah, I forgot to mention, back in July, my house was shown in the Cleveland Plain Dealer in an article featuring Garden Walk Buffalo. Reporter Susan Glaser interviewed me by phone about the Walk. We had a nice conversation. Our local convention & visitors bureau set up the interview.

We had many people visit from the Cleveland area. The wife of one couple planning on making the trip out here from Cleveland called asking for directions. She said she read the article in the paper. At that point, I had not seen the article, or even knew it ran. I asked her what photos they used and she described my house!

We do have about 20 images on the Garden Walk website Press Room available in high resolution for media to use in promotion of the Walk. The photo of my house is just one of them. I was obviously pleased they chose mine.

The woman from Cleveland told me was a big fan of gardening and tours. She said she would bring a copy of the article to our house during the Walk, on that Saturday. I wasn't here at the time, but she had a nice conversation with my wife and dropped off two copies for us. Aren't gardeners just the nicest of people?
Labels: Buffalo Garden Tour Garden Walk In Garden Magazines My garden