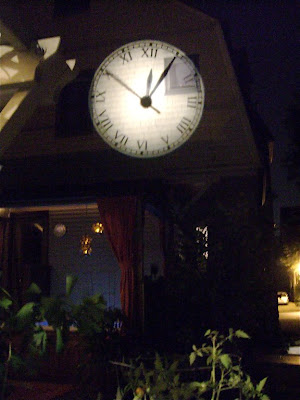 Last installment of my Nightlights Week of lessons. I wanted to add what lighting schemes I've utilized to a post, but it seemed like way too much to do in one post. And to do an occasional post wouldn't have much of an impact. So a week-long series made sense for me. I also wanted to see if anyone out there had any other clever ways of incorporating light into their yard/garden/deck/patio. I'm always looking to steal ideas. 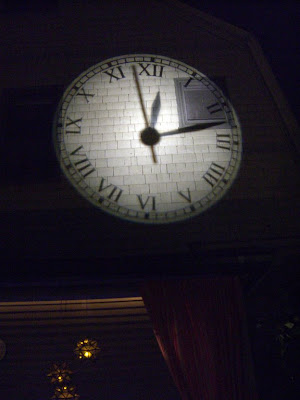 Did you know that on roman-numeral-faced clocks, tradition has the fourth number read as IIII, as opposed to IV? It's an aesthetic design decision to balance out the VII on the opposite side.
This last post is on fun lights - totally unnecessary, unfunctional, unneeded and unusual lighting. The king of which, is my uber-cool projection clock. I saw this more than 15 years ago in Germany. It was on the ceiling of a store and was projected on the floor. I thought it was the coolest thing I'd ever seen. It was $500. 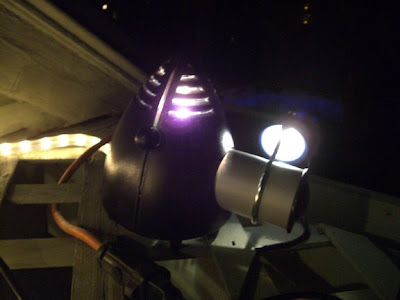 I started searching for it on what was then a dial-up modem, pre-Google. I found $500 versions. $650 versions and plenty more in the $1,000+ range. Too rich for my blood. Then, on a lark, last year, I went looking for it again. SCORE!! $50 at the Discovery store. Sorry, they don't have them any more. You can get their less expensive digital cousin, but it doesn't compare to this roman numeral, sweeping handed beaut. And to make the deal even sweeter, I forwarded the link and costs & product number to Mom, and, lo and behold – I got it for my birthday that year.

It usually sits inside the house at the top of my stairs, projected onto the immense wall that goes up the stairwell. The space is so large I have no artwork that would do it justice, but the clock can be as large as I want it to be. It is designed to be an interior clock, not weatherproof and not intended for outside use. But it hates to miss a party and a chance to shine, so it ends up outside if fair weather is predicted. It makes a great conversation piece and is a wonderful reminder for guests for how late it's getting. 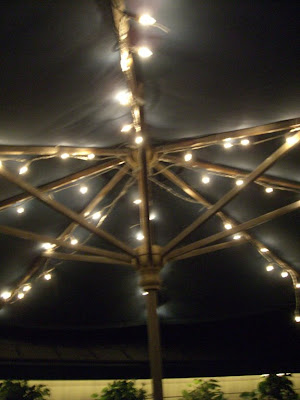 Found these lights on the Internet less expensively than we had been seeing them in catalogs. 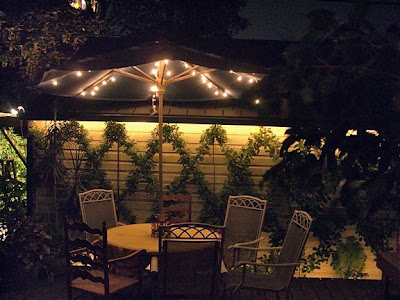 More fun lights include the umbrella lights on the umbrella. It breaks my rule of see the light, but not the bulb, but they are not obnoxious . They are specifically designed, spider-like, to be attached to the underside of market umbrellas. These were another internet purchase, which saved beaucoup bucks over the similar light sets we were finding in stores at the time. They light the table just enough for dinners which get devoured out here almost every evening of the summer. 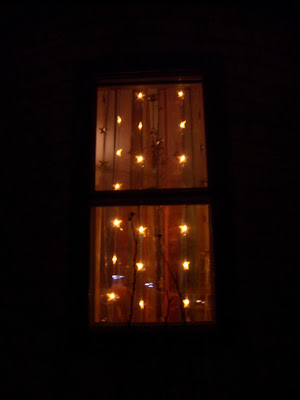 Another fun light we have, which is not in the back yard, but greets people coming to the back or just walking by the house are these draping lights inside our front three windows. We bought them and set them up for Christmas one year and liked the m so much, we kept them up, on timers, to go on every evening and off around 11 p.m. We've gotten many great compliments on them from neighbors. From the inside they look great inside our rainbow-colored gossamer-looking shears. 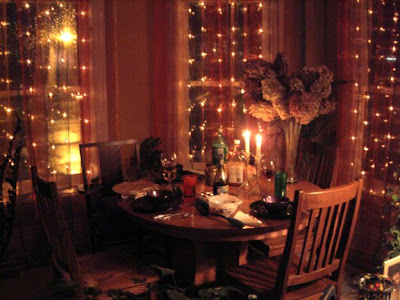 The draping lights from inside. This was Valentine's Day a few years ago. Our then-seven-year-old made dinner for us. Chicken noodle soup, hot dogs microwaved to perfection and cucumber, pepper and strawberry salad. We've not let her make a meal since.

I also just purchased two rock-looking solar spotlights. I'm not sold on them yet though. It throws off a blue-tinted light that doesn't look good with the amber glow of all the other lights. And I have to find the right place to put it. Maybe in the Harry Potter Garden.

More fun lights I'd like to add include a star-projector to project over the hot tub. That way we can see stars when the stars aren't out. I also have a neon sign of my last name. I just have to figure out a way to not have it look tacky (like a beer sign or something). I designed the sign 25 years ago at my first job out of college, designing neon patterns at a neon sign shop. I'd like to put that somewhere near my grill, attached to the house.

Monday was the Safety Dance. Tuesday was Ambient Light. Wednesday was Tub Lights. Yesterday was Fire light. I hope my posts have illuminated your week. Got any good novelty light ideas I can incorporate into my evening plans?
Labels: back yard My garden Outdoor Lighting