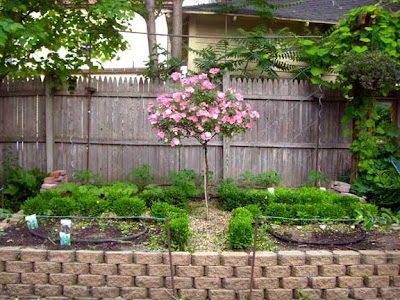 On bloom day, I got so many comments about the rose standard, I thought it would be a good time to show it in the context of its setting–in the middle of the raised-bed vegetable potager garden. 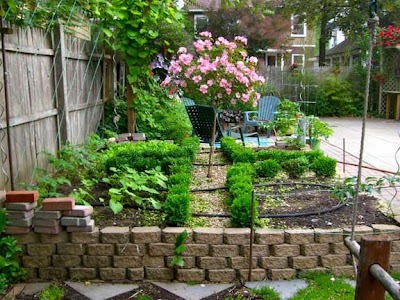 From the side: beans on the left just getting started. Tomatoes along the back. Some unenthusiastic basil and dill in the front. It sits beside my steppable grasses checkerboard, which I hesitate to show because it's so weedy right now. To the far right are more roses climbing an arbor over the front of the garage.
I've posted plenty times about the potager (most recently here), inspired by a trip to the formal vegetable gardens of Villandry, in France, a few years back. The potager is divided in four sections, with space for climbers, or support-needy plants, in the back along a copper lattice. Each section is divided by a pea-gravel path and miniature boxwoods. The boxwoods were planted just last year, so they've not grown together to form solid walls. That's the plan, god-willing. 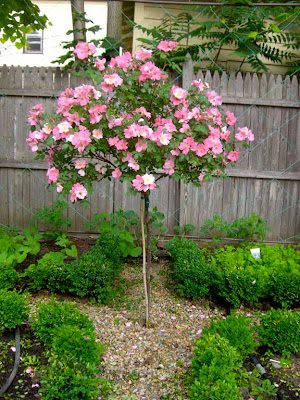 The rose was purchased as a standard, it's variety is "Polar Joy."


The Villandry gardens contain much symbolism, with rose standards representing the hunched-over monks at constant toil in the gardens. Mine? The best description I've heard of mine is from NellJean's comment from my bloom-day post–it looks like a "bouquet on a stick." I can live with that.

There's also a dwarf apple espalier starting around the outside of the raised bed, planted just last year. It's knee-high, intended to surround the front of the garden. That's a slower-going project. Stole that idea not only from Villandry, but I saw it at Monet's garden in Giverny as well. Don't know who he stole the idea from. With the problems of my dwarf apple tree on my diamond-shade espalier (dusty mildew & galls) I'm a bit nervous for these little guys. But I press on. 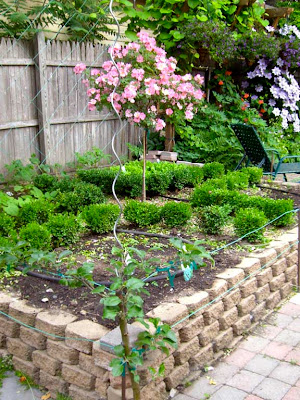 You can see the young dwarf apple espalier in the foreground. It also served as a rabbit snack in the spring as they chew the weaker branches. You can also see my happy clematis in the background
That's just the plants going into the garden design. The vegetables planted include lettuces, cucumbers, tomatoes (this is my first year with trying heirlooms), arugula, dill, peppers, basil and green beans. The gardens of Villandry were filled with Swiss chard and kale, and other vegetables that are full of color and spectacular to look at, but not vegetables we would ever eat.

This weekend is the first harvest of lettuce. Second planting is going in this weekend too. I may have to cheat and buy plants to fill in before the thousands come through for Garden Walk.
Labels: back yard espalier My garden potager vegetable garden