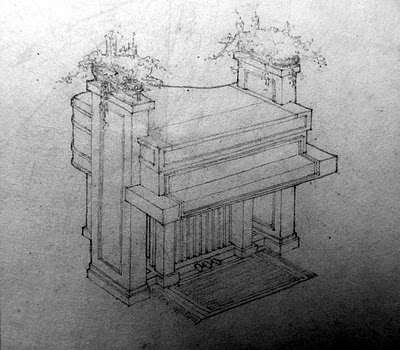 I don't steal things from other sites for my own posts, but I came across this post by my friend Eric Jackson-Forsberg, the curator for Frank Lloyd Wright's Martin House Complex. It was on the Martin House blog he writes, The Weekly Wright-up. It intersects my interest in all things gardening and my Wright fascination.

It's a piano Wright designed for the Martin House (never built) that actually had planters built into it. It doesn't say so, but I would assume Wright would have also spec'd the plants he'd have intended for the planters.

I'm no piano expert (okay, I know nothing about pianos, or any instrument, for that matter) but I cannot imagine a "...design that is a curious hybrid of baby grand and upright, with pier-like front legs that sport ovular planters" would be huge with piano players or music aficionados. Would it still sound good? Would the plants grow better with music? What music do plants like?

But damn! It would have looked good in the room. If I could have a piano like this, I'd learn to play.
If you visit his blog, please also check out his post on Wright's interior color designs and choices. He makes an argument the the interior colors used in rooms throughout the house were derived from ginkgo trees in Fall from the surrounding Frederic Law Olmsted-designed neighborhood. It's mere conjecture, but knowing Wright, by his own admission, was inspired by the organic colors of nature it seems plausible. And then, if you see the one (nearly) finished room at the house, you'd believe it too.
Labels: Buffalo Wright