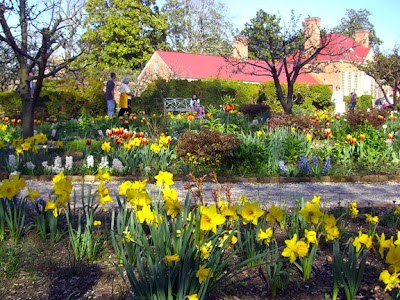 Everything looks cheerful, except for the pre-teen sitting n the bench, not happy about having to stand in line an hour to tour the mansion. In the background is Washington's greenhouse.

Daffodils, tulips, hyacinths and the occasional impressive Crown Imperial Fritillaria–classic spring bulbs for a classic American garden. Shown is the Upper Garden, mostly flowers and some vegetables, restored to the bed sizes from Washington's day. 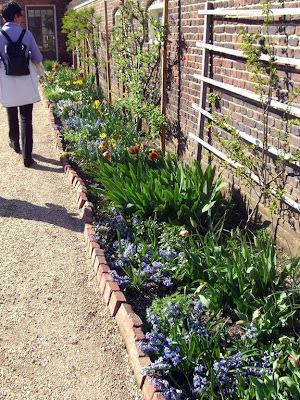 Bulbs beneath espaliers. There were espaliers all over the place - probably a couple dozen. That's something George and I have in common. That and a hot wife. Martha was a babe in her younger years.
We went to visit Mount Vernon last week and caught what might be the peak of color in the spring bulb gardens there. I have no idea if these were anything close to what the first president had originally intended, but it certainly was colorful. 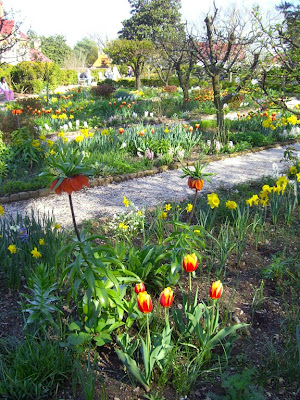 Great lookin' Crown Imperials. I've not had much luck with those here on my estate.

Hey, did you know that at the time George Washington was inaugurated as the first president, he only had one tooth? We saw his dentures. They're not made of wood. They're made of lead, and human & animal teeth. Gross.

I'll get to posting about his other gardens at Mount Vernon in the future–Washington's farm(s) and fishing of the Potomac, made Mount Vernon one of the first large agribusinesses, and the source of his wealth (one would argue, the source of his wealth was the 200-some slaves he owned–316 at the time of his death). He was among the top 2% of the richest Americans at the time.
Labels: espalier Famous People's Gardens Garden Tour travel Washington