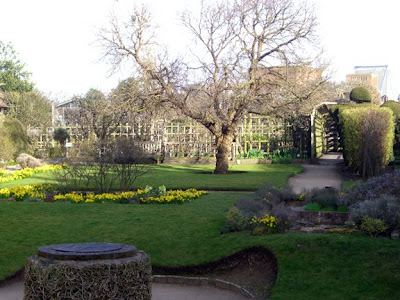 It's been a while since my visit to Stratford-upon-Avon, but my wife took these photos last week. I post for you here–Shakespeare's home & garden, his birthplace home & garden, and his wife, Anne Hathaway's house & garden. 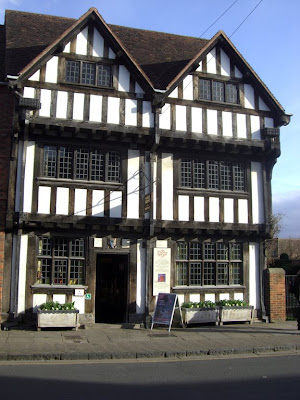 Nash House, next door to where Shakespeare's house once stood. This is the entrance to the grounds where major gardens now stand.
Above and to the right are photos from the Nash House (now a Stratford-upon-Avon history museum), next door to where Shakespeare lived, called New Place. He lived here from 1610 until he died, in 1616. At the time it was built, it was the second largest building in Stratford. The site of New Place (reported to cost 60 pounds in 1597, now it costs 10 pounds for entry to the museum), is now an Elizabethan knott garden, a typical garden of Shakespeare's time, most likely in the spot where his own orchard and kitchen garden were. These gardens were planted in the 1920s. 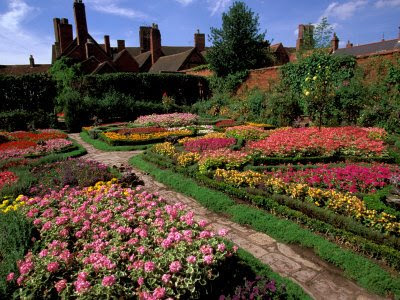 Since these shots were taken at a bad time of the year, the photo at the left shows the garden during it's peak. So you can see what it's supposed to look like.

There's a mulberry tree in the center of the very large garden, said to be a cutting from an original mulberry Shakespeare planted in roughly the same spot. Here you can find not only the colorful, herb-filled, formal knott garden, but free access to a topiary garden and English-style gardens throughout a large park called Great Garden at New Place. 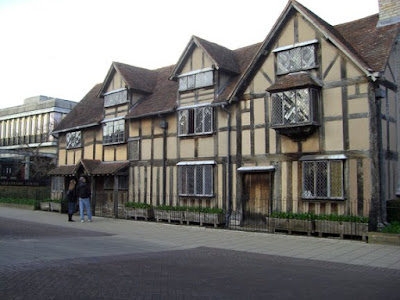 Shakespeare's birthplace.
Shakespeare's birthplace (born in 1564) is another site worth visiting. It is the home of his family & father, John's, glove-making workshop. He spent his first five years with Anne Hathaway in this house. Behind this building are some nice gardens not ventured into on this trip. Not much to see this early in the season. You'll find, in this garden, plants and trees mentioned throughout his plays. 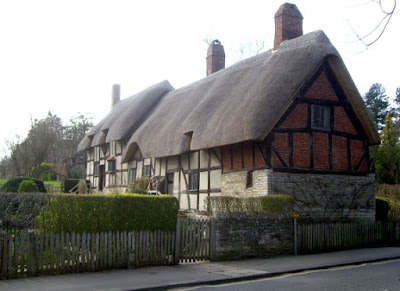 This thatched roof "cottage" actually a large home with 14 rooms.

Shakespeare's wife, Anne Hathaway's cottage is one of the most picturesque homes in all of England. The beautiful, rather large, home (her family's home) has gorgeous English gardens and paths through 90 acres of woods & orchards surrounding it. There's also a tree garden, planted in honor of Shakespeare. Paths Shakespeare would have wandered while courting Anne. This is in Shottery, just outside of Stratford-upon-Avon. 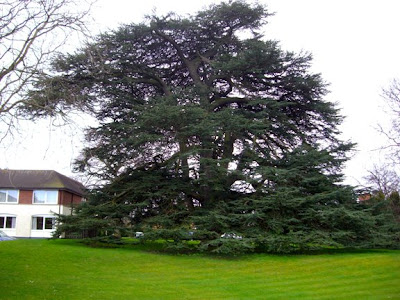 It is said that A Midsummer's Night Dream was first performed under this tree.
Now there are "Shakespeare Gardens" planted throughout the world (in many university gardens, Central Park, Brooklyn Botanic Garden, Chicago Botanic Garden, Johannesburg, Vienna, and dozens more), usually incorporating plants from his works (rosemary, roses, pansies, fennel, columbine, rue, daisies, violets and mulberry–more than 80 plants in total). They often have signage with relevant quotes relating to the plants displayed. They often are geometric in layout and composed of boxwood dividers. For more information on how to plant your own Shakespeare garden, and a longer list of Shakespearean plants, visit this post by The GreenMan, I found.

If you ever get to England, Stratford-upon-Avon is a must-see. You'd be hard-pressed to find a more lovely town in all of England. From the ancient Tudor-style buildings to unbelievable gardens to the swans on the picturesque Avon, the views are idyllic.
Labels: England Famous People's Gardens travel