Garden Walk on the front page–above the fold! 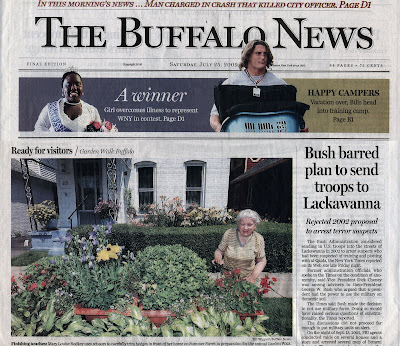 We did get some incredible coverage from the Buffalo News this year. I met up with News photographer Bill Wippert in the Cottage District on the day before the Walk to shoot some gardens. We came across Garden Walk gardener Mary Louise, trimming her enormous hedge with scissors (she told us she can't lift a hedge trimmer, so she's always out there with her scissors keeping on top of the trimming). We got a few shots before she realized we were photographing her.

We then approached her and told her we were taking some shots and asked if we could take a few photos of her working in the garden. She protested and protested, not wearing anything nice and not having run a brush though her hair. She didn't want to pose for us and kept protesting (in a nice way). Until we started to walk away. Then she yelled after us and asked if this pose, the one that we used on the front page of the paper was okay. We came back and took more photos. She was very sweet.

After the photo ran, I got this email from one of her neighbors, "Mary Louise is running on the last 5% of her heart muscle (and a lot of spit and vinegar) and really, really deserved that front page foto despite all her protestations. And she was just in her glory over it (bought six copies of the paper even tho' she has no living relatives) although she's still denying it..."