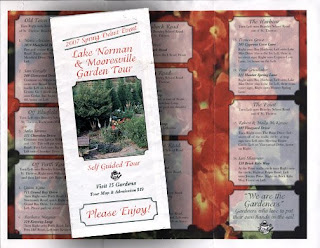 During Garden Walk this past July, an enthusiastic woman came up to me in my back yard. She introduced herself as Joanna and said we had had a phone conversation back couple years ago about how to start a garden tour in her community. She's originally from Buffalo, had visited our garden tour in the past, but has lived in North Carolina for many years - enough to change her accent!

Well, she started a garden tour, raising money for two home-oriented charities - Women Build and Habitat for Humanities. It is a 15-garden tour in Lake Norman & Mooresville, NC. It was held for the first time in spring of 2007. From our conversation, she was able to figure out her priorities, found sponsors, gardeners, a designer for the brochure and more.

She gave me this copy of the brochure and told me how enjoyable everyone found the tour to be and that they did raise some money for their charities. It made me smile for the rest of the day just to think that she thought I shared in the credit of the success of their tour. Honestly, it was almost two years earlier we had talked and I had forgotten about the conversation until she reminded me. I've talked to a handful of people in other cities that were interested in how we do things with our tour. We love the idea of sharing what we've learned.

Organizing a garden tour in your community is a good-sized project to take on, but the return is immense in terms of creating a community of like-minded gardeners, sharing your community with visitors, beautifying neighborhoods and sharing gardening ideas.

In a future post (or two), I will go over some of the steps Garden Walk Buffalo went through from its early days as a small block-club-oriented tour of 28 gardens to how the group operates as the country's largest garden tour of more than 300 gardens. Stay tuned.
Labels: Garden Tour Garden Walk