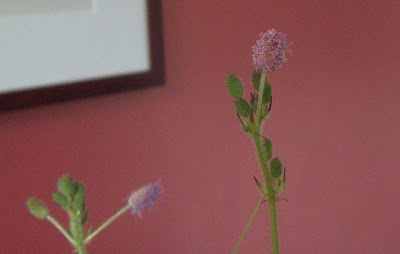 Anyone ever see this? I have a Sensitive Plant (Mimosa pudica), the carefully-deliberated plant choice of my ten-year-old daughter.

In our area, it's a house plant, but it loves being outside. It doubled in size this summer! I've only had one before, and it didn't last a month. I think we may be able to keep this one going. It did get these little tiny-pink-puff of a bloom on it this year. It looks like the speck of dust that Horton carries around, insisting the inhabitants of Whoville are in danger. 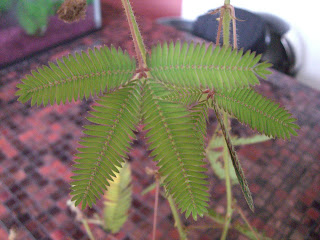 When touched, the leaves fold up immediately.

The Sensitive plant was a big hit during Garden Walk this year. We put it in my daughter's Harry Potter garden. Whenever board kids were dragged into the yard by parents or grandparents, rolling their eyes and wanting to be anywhere on earth–except a garden tour–we would bring them over to the Sensitive Plant and let them touch the leaves to watch them fold closed.

After a day of being told not to touch any plants, this was a welcome relief. Many kids came back to our yard, this time dragging their parents, either later in the day or the second day of the Walk to play with the plant again.
Labels: Garden Walk Houseplants My garden